The Zebra is the seventh Land animal in Mope.io, and the equivalent of the Donkey, Turtle, Muskox and Warthog.

The Zebra has a white body with 3 black stripes on its back. It also has a thin but rather long tail, a black long nose and a furry mane on its neck. Other than its body color, it generally has uncanny similarities to the Donkey.

Okapi has a brown body, with two thin white stripes at its rear end. It also has two sets of three chocolate-brown stripes on either side of its head. The Okapi's head is narrow, brown but with white spots covering the skin near its eyes. Small brown spots are also seen below these white spots.

The Zebra can use the same strategies as that of the Donkey, since their abilities are quite similar. With a Zebra, you have a very strong ability and can evolve easily. First of all, if you want to reach a higher tier, try finding a high tier animal (like Black Dragon with 30% HP). If many other kicking ability animals attack it, you can 'steal' the kill by kicking it when it is about to die. Also try kicking players into the Lava, to decrease their health and potentially kill them. If you want to try level up by killing a high tier player with your ability, try working together with other Zebras or Donkeys.

If you want to play safe, just eat Pears, Mushrooms, Red Mushrooms, or Watermelon slices at the Volcano. Spit into the whole watermelons by pressing S to water them, and thereby produce the slices. Another reliable and safe farming method is to eat Honey Bees. You can use your ability to damage and stun them, killing them before they have the chance to sting you.

When killing or fleeeing a zebra, be sure to stay a safe distance away from its rear. This is because, the back kick ability damages all predators/prey, and is quite effective. When being hunted by a zebra, take every opportunity to get as physically far away from it as you can. This is because it can turn around and kick you. Therefore, tail-biting a Zebra can be quite a challenge. The best time to do so is to is when it's occupied with another animal.

As a predator to the Zebra, it can be hard to chase one, if you can even be bothered to. Zebras provide relatively little XP, and probably aren't worth going for at any given tier. If one is annoying you, try going just out of reach if you see a zebra manoeuvring around to kick you. Then, try biting it as much as you can before the ability reloads. If there is a Zebra/Donkey army, or one is just annoying and you want to get away from it, go to mud, the Ocean or a hill. The latter isn't as safe an option, since Zebra kicks can still reach hills. However, as long as you avoid its legs, you should be fine. 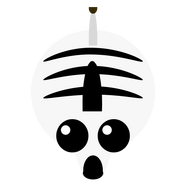 A Zebra near an Elephant in a lake.

A Zebra eating a mushroom bush. 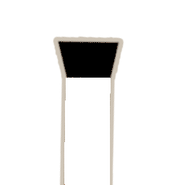 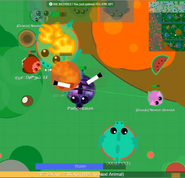 A reskinned Zebra killing a Dragon with a kick.
Add a photo to this gallery

Retrieved from "https://mopeio.fandom.com/wiki/Zebra?oldid=80114"
Community content is available under CC-BY-SA unless otherwise noted.