UPGRADED to Wolverine!
Press W to Let out a Powerful GROWL! (Knocks back prey!)

The Wolverine is the 12th Arctic animal in Mope.io, and is equivalent to Rhino, Eagle, Markhor, Shark and Bison.

Wolverine looks like a brown circle with 2 triangular, fluffy ears. Its fur is tufted all around the sides of the Wolverine's body, and the Wolverine's tail is short but quite a lot more fluffier. When it growls, the Wolverine opens its mouth, temporarily gaining angry eyes and showing its teeth.

Gulo gulo (Latin: Wolverine) also known as: glutton, carcajou, skunk bear, or quickhatch. Based on climate and on name, Wolverine is a sub-polar animal. See the Wolverine's wikipedia page for extra info.

Your growl ability can be used to either slow down prey or escape predators. If you are hunting, make sure that you use your growl against your prey, but before you do so, you must make sure that you are close enough, otherwise you will miss and your prey could get away. Be wary that your ability knocks the prey back, so once you growl, eat it at once.

If escaping a predator, growl if it is in range. Once the predator is stunned, you should have a few seconds to escape. It is better if you're on ice because the ability knocks it back, and it'll knock it back further on ice (ice is very slippery). Depending on the predator that's chasing you, you can use your passive abilities to your advantage. For Hippos, climb a tree. For Boa Constrictors or Ostriches, flee into the ocean. The mentioned predators may also not want to go into the Arctic biome due to freezing in there, so avoid them by staying around the Arctic too. On that note, Sabertooth Tigers are a lot harder, as they can go in the Arctic climb trees, hills and go faster in mud and water. Evade them by growling, and then going to the nearest hiding hole.

A recent update enables you to get outside of the Arctic. A good idea is to go back and forth. For example, when there's a land predator go into the Arctic, and vice versa. Your best bet for food is any animal a tier or two below. Try knocking prey with your growl into the opposite biome to freeze or burn them, they will struggle badly and make them easier to eat. Crocodiles are your best bet if they are nowhere near water, you are also fast in mud like them. Bears are great when they are in mud that slows them down which allows you to eat them, just don't let them get near hills or trees. If you find a Tiger deep in the arctic, attack it and lure it into water spots and lakes to freeze it and eat them as quick as possible. Don't let it get on ice, it may use their pounce ability to slide away from you.

You can also have fun with a Lion, and challenge them to a roaring contest. You have a great advantage as your roar radius is larger and also takes away more health then the Lion's puny roar which can only obliterate players within 3 berry bushes. After they have only one-sixth of their health left, they'll flee. Just let them be. If you are really nasty, chase after it and roar it to death when you can.

They are lethal predators, that are also quite capable of putting up a fight before being eaten. Wolverines are great at surviving in multiple environment forms, including mud, ice, water bodies and trees. Their only weakness is that they can't climb hills.

As prey to a Wolverine, your best bet is to take refuge on a hill, rock or hiding hole. Make sure to not stay in a close radius of Wolverines - their growl can stun, damage and is quite effective in doing so. If you manage to dodge the growl, you'll be able to get ahead for a little, as it won't be able to boost for about a second. Utilise this time to flee to a hiding hole or hill.

Another place they can't go is near the Volcano. Wolverines will most likely be reluctant to stray too near the Volcano, and the Phoenixes/Black Dragons there should scare them off.

If you're a predator of the Wolverine, you'll have to use every advantage that your animal has. If you manage to get one near the Desert, try herding them in there, and making them burn, as well as possibly be damaged by cacti. The same strategy can be done with the Volcano. Since the growl ability thrives in acting as a defense, slow down if you can, just before you think the Wolverine will activate the growl. 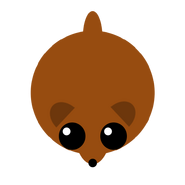 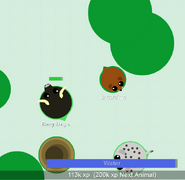 The Wolverine with a Snow Leopard and a Muskox. 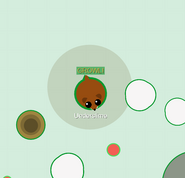 The Wolverine using its growl ability.

A Pygmy Hippo trapping a Wolverine on a tree.

A glitched Wolverine who's mouth is still open after using its ability.

A glitched Wolverine near a whirlpool.
Add a photo to this gallery

Retrieved from "https://mopeio.fandom.com/wiki/Wolverine?oldid=79188"
Community content is available under CC-BY-SA unless otherwise noted.