The Wolf is the 8th Arctic animal in Mope.io. It's the equivalent of the Bear, Tiger, Gobi Bear, Hyena, Pelican and Swordfish.

If you are hunting, then approach your prey and howl! This will stun your prey, giving you some time to either catch up with it, or grab a few bites out of it. You can also howl it off a rock or hill, making it useful against seals and other prey like that can go on hills or rocks.

Also in real life, most wolves will do good in packs, this would be a good strategy on Mope.io because howling at each other won't have an effect, and you can gang up on a predator to take it down by howling all around it a lot so you can bite its tail. Or you can use safety in numbers, for defending each other from predators, and the power of the pack in hunting prey. Wolves are very good on ice, making them a very agile predator on ice, mainly for animals that can't turn well or can't slide on ice. The only problem is agreeing on who gets the kill.

If you are being chased by a predator, then turn back and howl since your howl can scare predators and knock them back as well. Only do this if you're a fair distance away from them. If the predator is right behind you and you turn around to howl, it can take away a lot of your health. Even better, use it on ice so the predator will slide back even further.

To level up safely, eat Arctic Nuts (they give you as much as 500-1K XP!) by finding a bush in the arctic or packing snow together, although you can eat other food, Arctic Nuts are the best. Another option is to go to a Lake, and eat Ducks there. Lakes often attract prey, so you can kill animals that don't swim well in water if you see any.

Wolves are quite hard to kill. If you're prey to a Wolf, your best way of avoiding it is by either taking refuge on a hill/rock, or swimming away from it in water. Wolves can't climb hills, and don't swim well, and are therefore easy to avoid in those environments. However, they are fast on ice, and their howl can stun you. Try to dodge the Wolf's howl if you can. A positive of the howl is that it pushes you forward, so that evens out the stunning time.

As a predator to the Wolf, try overtake it by climbing hills and dodging howls. For a few seconds after a Wolf howls, it can't boost. If you're able to dodge the howl, utilise this small time to quickly catch up with the Wolf. Even try chasing it out of the Arctic, where it will suffer extra burning damage. Use your powerup if it helps, to damage and slow down the Wolf. 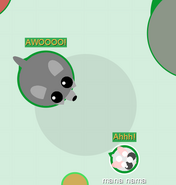 A Wolf's howl in action against an Arctic Hare. 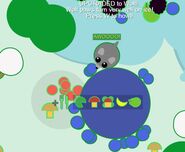 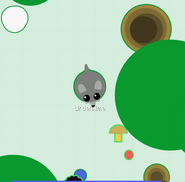 The Wolf near a hill. 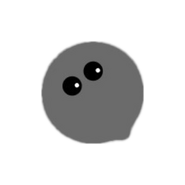 The Wolf with old skins activated. 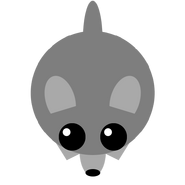 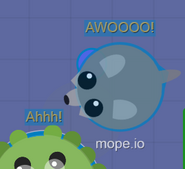 A Wolf with a Kraken, howling at it.

A Wolf near a lake and some hills. 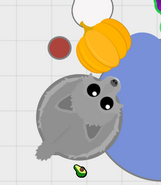 A Wolf with a rare Golden Pumpkin.
Add a photo to this gallery

Retrieved from "https://mopeio.fandom.com/wiki/Wolf?oldid=81195"
Community content is available under CC-BY-SA unless otherwise noted.