Not to be confused with Melons, a similar type of food that can only be found in the Desert biome.

Watermelons are a type of food source that can be found at the Volcano, Desert and Arctic Volcano. They were added to the game on April 9, 2017.

It is simply a green circle, with vertical, darker green stripes on it.

Not to be confused with Melon Slices, a similar type of fruit slice that spawns near Melons in the Desert biome.

Watermelon Slices are another form of the watermelon, that can be found in the Desert, Volcano and Arctic Volcano. They were added to the game on April 9, 2017.

A single slice is a dark red semi-circle, with five black seeds on its left side

If you are a lower tier, you can shoot water at the whole watermelons to gain watermelon slices by approaching the volcano. If your animal is not immune to lava, be wary about your surroundings and make sure you do not get burnt.

Another good strategy with watermelons is to find a server with minimal players, and find a small lava pool in the server. Start spitting water at whole watermelons as a desert rat, while eating nearby food to level up. By the time you get to the fox tier, you will have enough watermelon slices to get you to the Vulture tier, or possibly even the Eagle tier.

As you progress to higher tiers, watermelons will be less XP-providing as before to your animal, but you can still eat watermelons as normal. Be aware of the higher tier animals immune to lava around the lava patches in the desert or at the volcano.

As Phoenixes, you can circle the volcano and eat them. they would spawn before you reach the other end (if you circle the whole thing). Be careful of Black and King Dragons and Land Monsters and cannibals, but on the plus side, there's holes and you have infinite lava.

As Black Dragons, you can do the same up to 20M XP. Then, you have 3 fireballs instead of 2.

Some watermelon slices nearby in the Volcano. 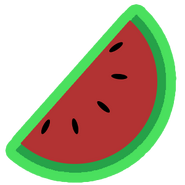 A watermelon slice
Add a photo to this gallery

Retrieved from "https://mopeio.fandom.com/wiki/Watermelon?oldid=83454"
Community content is available under CC-BY-SA unless otherwise noted.