UPGRADED to Vulture!
Press W to Grab/Drop bones on other animals,
(Hint: Use ability on hills to fly)
Try eating bones too!

The Vulture is a tier 11 Desert animal in Mope.io, and is the equivalent of the Crocodile, Falcon, Lion, Octopus and Polar Bear.

The Vulture has a gray body with wings that are black-tipped. It has a pink head with a black beak. On its head appears to be some feathers that are a different shade of pink. Its tail feathers are a slightly different shade from the aforementioned body color. Also now we have a Pakistani Vulture which is probably one of the rarest animals (normally 1/3000 chance, but buffed since the latest update). The Pakistani vulture is a dark-green color with a white head and a Pakistan flag on its back.

Find Aloevera plants and eat them to gain a lot of XP. Also, try eating Melons, and make Watermelon slices to level up fast (press S and spit water droplets into whole watermelons; as slices in bulk, they give more XP, note that this wastes your water, so try to have a whole bar before spitting). You can also tail-bite animals by camping in a hiding hole, and when a high-tier predator comes out, use your ability to quickly fly up to the predator and bite it. This will prove most successful when predators are distracted with large prey. Therefore, try flying into a predator's tail if you see it chasing prey. If these options aren't available, use your ability to pick up a carcass and throw it on the ground to gain more XP since they give loads of XP. If there are other animals that can eat bones that are around, then just take the carcass somewhere else or just eat it right on the spot.

Some desert predators such as Bison and Komodo Dragons are easily avoided. Go on a hill and fly away, or wait until they move on. However, Blackwidow Spiders and Pterodactyls can be more of a hazard. Pterodactyls can deal quite a bit of damage in the air, multiple hits in seconds as it dives and swoops for prey. Because of this, don't fly if you can see one. However, if you feel like the Pterodactyl won't bother you or doesn't notice you, fly up and try to get a tail-bite it! Avoid Blackwidow Spider as when you try to tail-bite it, the spider can trap you in its web. Blackwidows are also hill/rock-climbers, so run from them if on low health. But, you can try to steal the Black Widow's aloe as you can fly away when it tries to attack you.

The Vulture isn't a high achiever in offense and catching prey, and farming is often a faster and more fruitful method of progressing to tier 12. Pursuing prey such as Gobi Bears, Hyenas or Rattlesnakes are options if you want to go for a kill instead. The latter two are easier since they are ground-dwelling animals, and your hill-climbing advantage can make it easier to pursue them. If you are chasing prey and falling behind, use your flying ability to fly, catch up and land on top of them, causing damage some upon landing.

An ultra rare Pakistani Vulture flying over a normal Vulture.

A Fennec Fox whining at a Vulture and a Pakistani Vulture near a Giant Scorpion.

Vulture flying over the ocean

A Vulture flying into the void. 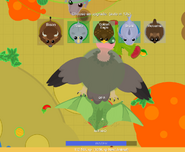 A Vulture about to upgrade to a rare Golden Eagle!

A vulture in the lava beside a healing stone. 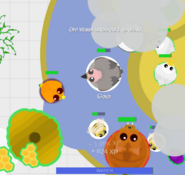 A Vulture in an arctic lake beside a Large Duckling.
Add a photo to this gallery

Retrieved from "https://mopeio.fandom.com/wiki/Vulture?oldid=81167"
Community content is available under CC-BY-SA unless otherwise noted.