The Volcano is a terrain in Mope.io that is located at the center of the map.

The Volcano has dark brown ground, with lava circles around it, and some hills and rocks in the surrounding area too. There is a large circle of lava in the middle, but it doesn't harm any animals unless the volcano is erupting.

The volcano was meant to be used along with the Black Dragon, which drinks lava instead of water. The volcano came out in the same update as the Black Dragon and same with Healing Stones. Animals that aren't immune to lava, will be on fire when in the lava.

Standing at the center of the volcano soon after it erupts will drastically increase your FoV. This can be used to scout. If you are looking for prey or predators, stand on the center to see if there are any prey or predators. Likewise, if you have an AFK friend, you can stand on top of the volcano to spot any potential predators to them to get ready to save your AFK friend. This also works if you are looking to spot prey for a friend so you can help them level up.

There is also an Arctic Volcano that spawns in the arctic. Unlike this one, it has eruption phases that dramatically change the landscape. Refer to this article for more information.

A Volcano along with a giant Healing Stone.

Rabbit taking a dip in the Volcano's lava. 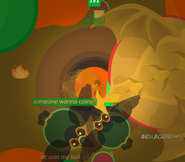 A Phoenix hiding in a volcano.

A Dragon burning in a erupting volcano

A Lava Toucan chilling in the volcano.
Add a photo to this gallery

Retrieved from "https://mopeio.fandom.com/wiki/Volcano?oldid=84419"
Community content is available under CC-BY-SA unless otherwise noted.