The Trout is the second Ocean animal in Mope.io. It is the equivalent of the Rabbit, Pigeon, Arctic Hare and Desert Chipmunk.

The trout, when first upgraded, is perhaps the smallest animal in the game. It is also the first animal with a tail, which unlike most animals tails, cannot be bitten by its prey. Its body colored a rosy brown, with two pectoral fins, two adipose fins and one caudal fin. Two small sets of gills can be seen on both sides of the Trout's head.

Try to look for Shrimps and Mice in ocean. If you see a Mouse in the deep ocean, eat them easily. If you see a Shrimp, use your ability to quickly catch up. Both of these animals level you up fast, but it can be hard to catch them at times, so don't chase a particular Shrimp for too long.

A third strategy is to farm on a Healing Stone. They are purple colored stones that can level you up very fast. If you see a predator such as Crab on a healing stone, dive under the healing stone, so that you can use its effect while also evading predators. If you are running out of air, then retreat. Repeat until you are levelled up.

You can also use your ability to tail-bite predators. Look as though you're idle and then boost up to the predator's tail. The best one to do so on would be Squid - Sea-horses are hard to bite and the Jellyfish will sting you if you bite it.

Finally, you can farm plankton, the way you do with Shrimp. This method isn't as fast, but will boost your XP a little. 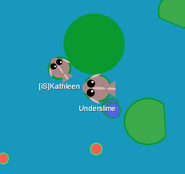 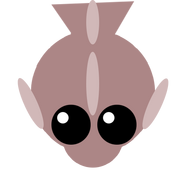 The trout with animal images turned off.

A Trout with old skins about to upgrade.

KoA playing as a Trout, teasing the high-definition skin.

A Trout in a Desert Oasis.
Add a photo to this gallery

Retrieved from "https://mopeio.fandom.com/wiki/Trout?oldid=78164"
Community content is available under CC-BY-SA unless otherwise noted.