Trees are structures in mope.io. They have a 1/3 chance to spawn coconuts, and they have a 2/3 chance spawn out bananas, In Desert they used to spawn oranges, and the biggest tree/Arctic trees don't spawn anything. Its old design was just like a big and lighter hill since it had a bush on it. Only Seal, Crab, Turtle, Gorilla, Bear, Walrus, Polar Bear, Dragon, Black Dragon and all the animals that can fly, could climb or fly over it.

Their new design has a green/white/lime cloudish shape that resembles leaves, while in the middle it has a transparent tint where the trunk is showed with some branches. When you go underneath the tree, it will get fully transparent so you can see where you are, but you will get transparent yourself too. Animals such as, Gorilla, Bears, Foxes, Wolverine, Cheetah, Mice, Snakes, Spiders, Snow Leopard and Lioness can get up by touching the trunk and pressing the 'S' key. This way they can also get off. You can climb on other clipping trees. There was formerly an effect where if you didn't press 'S' to climb down the tree, you'd fall off and recieve a little damage. One portion of the land biome is covered in trees, being the 'forest' biome.

Currently, animals can fall off trees without taking damage, and you fall immediately, so tree climbers can fall straight onto the tails of unsuspecting non-climbing predators. However, if you want to do so, make sure you will level up from the tail bite, or the predator will retaliate and you won't be able to get back up the tree for a little while.

How it looks like when you go underneath a tree. 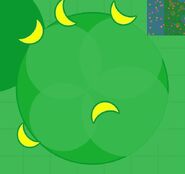 A coconut in left side, along with birds trapped in a sinkhole caused by a Land Monster

A Musk Deer near a fir tree that is supplying Arctic Nuts.
Add a photo to this gallery
Retrieved from "https://mopeio.fandom.com/wiki/Tree?oldid=80192"
Community content is available under CC-BY-SA unless otherwise noted.