UPGRADED to Toucan!
Hold W to fly around.
(Hint: Start flying from a fruit tree or bush to throw a fruit upon landing!)

The Toucan is the ninth Land animal in Mope.io, and equivalent to the Cheetah, Gorilla, Pufferfish, Rattlesnake and Snow Leopard.

As of now, there are 6 different Toucan species.

The Toco Toucan has a white body, with black feathers and wings on top. The wings become a lighter shade of black at the tips of the wings. Its beak is an orangey-yellow, with a black love-heart at the beak's tip. The Gold Trimmed Toucan replaces the white feathers with gold except for on the head.

Its wings are green, and upper-body is a dark blue. The Prisma Toucan has differently-colored wings. There are layers of green, yellow, orange and red-pink (in that order) descending down its body.

Choco Toucan looks like the normal Toucan, aside from its yellow head, upper-body and tail-feathers. Also, its eyes are outlined with pear-green.

The Keel-Billed Toucan looks like the Choco Toucan also, except its beak is green in the middle, with purple on the tip, and blue and orange markings on the sides. The yellow head, upper-body and tail-feathers are also a darker yellow in comparison to the Choco Toucan. Additionally, its eyes are outlined with a forest-green.

It looks like the normal Toucan, except its upper-body and tail-feathers are a mango-yellow. The beak is outlined with red, and the rest is also a mango-yellow. The Fiery-Billed Toucan's eyes are blue, with small red triangles visible above the eyes.

The Lava Toucan has black feathers, but a lava-red upper-body, and tail-feathers. Its beak is black with a yellow crescent up the top. Its black eyes are outlined with dark red circles.

It has a white body, with dark green feathers and wings. When the Pakistani Toucan is flying, the Pakistani flag's symbol can be seen on its back.

It has dark navy and sky blue feathers with crystalized shapes.

When hunting for prey, just fly in front of them, stun them with Food, and have a good meal. You can also fly into an unsuspecting predator's tail, and bite them. If hunting and tail-biting are not your bread and butter, then just farm off of Ducks and Pears. If you get chased by a predator, simply fly away. If you just flew into the ocean, and a predator is chasing you, dive to help with your flight, and once your ability has been recharged, fly away into either a whirlpool or onto land, as either work. If you do decide to enter a whirlpool and the predator still wants you even while you are there, dive out when you need water. Once you are satisfied with your water bar, and confident you can get away, fly away.

If you want free tail-bites, get coconuts ready and help a predator catch its prey by stunning them with said Coconuts. If they want to thank you, they will most likely let you bite them, and then you can claim your reward. Another way to get XP quickly is to get a Coconut, wait for a weakened predator to come by, then throw a Coconut at it to kill it. Note that coconut Trees are only at Beach.

There are many crafty things you can do with the Lava Toucan's immunity to lava and its ability to shoot fire. The most obvious one is to fly in and try to bite a Dragon, Phoenix, or Black Dragon's tail. Another not-so-obvious thing to do is to bait a predator into the lava so the lava can cook it. Then, you can have a nice meal. However, because the Lava Toucan is so rare, staying as it might be nice since less people will attack you. This shouldn't stop you from trying to eat a Dragon or Phoenix if you get the chance, though. There is one pretty big flaw though. You drink Lava, but have a low Lava time, meaning an Eagle can fish you out of the Lava if it wants to. As a result, fly away immediately upon seeing an Eagle.

Lava Toucan can also attack Animals while flying and hiding by pressing 'S', which shoots fire. As a result, if you feel daring as Lava Toucan, you can attempt to take on a predator. Fly and shoot fire periodically to continually damage them. Use Trees, Holes, and Hills to the maximum of your benefit. Remember to watch your lava, though, otherwise you might die. This can be remedied by hunting in the Desert though, where you passively regain Lava, and you also get access to Coconut Trees which give you Coconuts to stun and do a lot of damage to predators. Pterodactyl are also a prime target in the Desert due to their ability requiring a lot of time to start up, thus allowing you to interfere with its ability. Giant Scorpions are also potential targets as they have a more lethal ability, and a lot more HP, making them much more difficult to kill.

Also if you're a toucan, you can approach the Volcano (it doesn't matter which type of toucan you are), and shoot water at watermelons to turn them into watermelon slices, making it easy for you to level up. 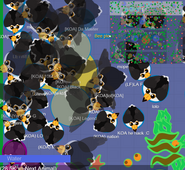 The Toucan storm advanced to the Ocean! 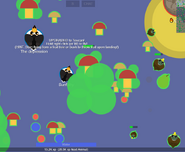 Two Toucans at a lake with many food sources, and a sneaky Boa Constrictor at the top right.

A Toucan attempting to throw a coconut (under the bush) at a Black Dragon, while another Toucan hangs over the BD. 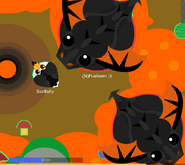 A Toucan next to two Black Dragons. 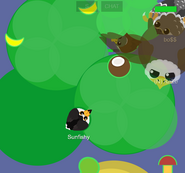 A Toucan ready to have many bananas and coconuts. He might wanna watch out for the Eagle and other potential predators, though...

A Choco Toucan in action.

A Pakistani Toucan flying. Notice how flight reveals the entirety of Pakistan's flag.

A Lava Toucan that stole a Phoenix kill from a Dragon.

A Choco Toucan gliding around in the void. 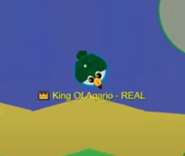 A Woodpecker flying over a Pig, escaping a hungry Toucan!

A Pakistan toucan with his white rhino friend

A pakistan toucan with a black lion

A Lava Toucan chilling in the volcano.

a lava toucan exploring a pond

Retrieved from "https://mopeio.fandom.com/wiki/Toucan?oldid=84685"
Community content is available under CC-BY-SA unless otherwise noted.