The TimberLand biome, partially known as the Amazon Rainforest, is a sub-biome within the Land biome. While it was initially added on March 3, 2020 as the 'Amazon Rainforest', it was later re-named to 'TimberLand'[1] on October 2. 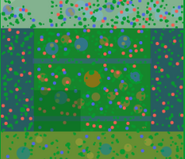 The TimberLand biome on the minimap, which is the shaded square.

Add a photo to this gallery

Retrieved from "https://mopeio.fandom.com/wiki/TimberLand?oldid=80368"
Community content is available under CC-BY-SA unless otherwise noted.