UPGRADED to T-REX The Dinosaur!
This ancient dinosaur has powerful jaws that can drag prey around!!

The T-REX, also known as Tyrannosaurus (Rex), formerly known as Dino, is a tier 15 Land animal, and the equivalent of the Yeti, Phoenix, The Kraken, King Crab, Dragon, and Pterodactyl.

The Tyrannosaurus Rex (also known as the Dino or T-Rex) is a dark red, with a row of three creamy spines on its back. It has a formidable size and strength, with small, jagged teeth protrude from its massive jaws.

Compared to its relatively large stature, the T-Rex has small arms, which don't even extend past its snout. On its neck there are two scars, each one resembling something like a claw scratch.

Fight other apex animals, such as Dragons, using your newly buffed ability to drag them around. When fighting dragons, try to stay in water while fighting it so the fire doesn't do much damage at all and dive when needed. When you get the opportunity, grab the dragon, and try to swing it in a way to get a tail-bite in, too. Try to dive when waiting for your ability to recharge to further lower the amount of damage you take. The dragon will eventually have a much lower percentage of health than you, if you have successfully stalled them by diving in the water. By this point, if not already, they will flee. Before they can, use your ability to drag them back for the finishing shot. You can also attempt this stalling strategy on monsters, mainly the Ice and Dino Monsters, but be sure to be near a cave or whirlpool and not get too risky.

When going against a Kraken, try dragging them onto land right after they use their ability. If they use their Whirlpool, you should turn around before you get tail-bitten. If they run away, let them be. Don't go too deep into the ocean where you are slow. Also try to drag King Crabs out onto land. Even though they can survive for a little while on land, they are slower than most animals, and if you successfully block their path back to the ocean, it should be easy to eat them. Confiscate any healing stones or water it finds by dragging it away. This "fishing" strategy also works against other high-tier ocean animals such as Blue Whale.

Another way to level up is by killing Yetis. They can give you a TON of XP. Plus, they get slowed down outside the Arctic, and run out of water extremely fast, and have a very short diving time. However, do not look for trouble in their biome as they will have the same advantages you have outside the Arctic when fighting. When fighting, watch out for their snowballs which will deal damage as well as freezing you. Also, try going for Pterodactyl. They don't have a way to defend themselves from your ability. When it tries to fly always use your ability to stop it and immediately terminate it to stun it and doing massive damage. When it down, try tail biting it. Repeat this until it is dead.

If you see a Black Dragon, unless you are teaming or it is getting targeted by a lot of small animals, or that it is on low health, run and hope that they don't target you. Try to dodge their fireballs. If you see a water puddle, refill your water and then run to a nearby cave and wait them out. Going to the ocean could be a good idea, because your diving time is quite high and the ocean has whirlpools. You can dive, look for a whirlpool, and go in and out of it while diving. If you are teaming/it is on low health, wait until it is low on health (very low), and then jaw bite by its rear ends so it can't bite you and that you can sneak a tailbite in. If you failed, you may as well look for a cave. As of new updates, you can stall and kill Black Dragons if you're careful and they don't run.

If you see another T-Rex, then make sure to make the first move, so it is sealed that you will kill it, just make sure that there aren't any hiding holes/whirlpools/or water spots around. However, the result of a battle between another T-Rex may not always be clear from who takes the first move. Make sure when dragging the other T-Rex around, to try swing it so that you also get a tail-bite in. Be aware that other factors, such as prey trying to get their own XP from you, could change the results of the fight. In any case, if you want to guarantee chances of not dying, ask the other Rex to team or to be on peaceful terms (however there is no guarantee).

When fighting a monster, go in a lake, ocean, or water spot (Ocean is best). Dive and use you ability on the monster, you will kill it.

Another way you can level up fairly quickly is with the Desert strategy. Using this strategy, try to occupy the space between the land and desert. Try to pick a spot with multiple water spots and large Hiding Holes. Once you have picked your spot, eat high-XP foods such as Aloevera and Melons. Make sure to frequently refill on water, stay away from Giant Scorpions, Land Monsters, and other predators. However, the heart of this strategy employs cactus, which does huge damage to animals that can eat it. Try to grab Komodo Dragons or Blackwidow Spiders, or even other T-Rex's, and bash them against the cactus. Doing it right, prey will be left dead or with almost no health. If you really want a challenge, target other Apex tiers. However, keep in mind that if you mess up, other T-rex's will be able to use your strategy – possibly killing you. 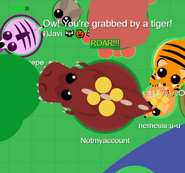 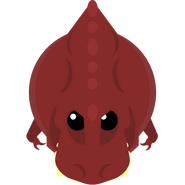 A mini Dino Monster with his family, consisting of 2 T-Rexes and one Emerald Pterodactyl.
Add a photo to this gallery

Many players criticized the T-Rex for being simply too strong, as it could kill any animal with ease. Before the KingOfMope Update, it is nerfed and no longer is very powerful as not many people use it anymore but user Dino Gamer proved that it was powerful and strong and it is more favored than any animal. But after the #KingOfMope update, it was buffed again. It could kill a dragon with two jaw bites, and was immune to fireballs (bug, later was fixed).

However, from the #GoldenAge update through to May 2020, the T-Rex has again been subject to a lot of criticism for being too over-powered. Compared to all the other apexes, which are a lot weaker in comparison, the T-Rex can cause high damage to other apexes, and predators. Namely its long diving time, ability to grab animals that have been diving for 3 seconds or less, and just that other apexes have weaker powerups makes it easily able to kill other animals outside the 1v1 arena.

In June 2020, it has been announced by KOA on the YouTube community that the Rex and Dino Monster will both be receiving nerfs in a near-future update. As promised, the T-Rex saw nerfs in Beta on June 25, which was transitioned to live Mope on August 11. Now, the ability will cause less bleeding and no stunning whatsoever, making it harder to catch prey but not leaving the T-Rex defenseless.

Retrieved from "https://mopeio.fandom.com/wiki/T-REX?oldid=82174"
Community content is available under CC-BY-SA unless otherwise noted.