Not to be confused with the Manta Ray, a scrapped ocean animal with characteristics.

The Stingray is the eighth Ocean animal in Mope.io. It's the equivalent of the Cobra, Giraffe, Snowy Owl, Walrus, and Camel.

The Stingray is colored gable green and has two triangular fins with a lighter hue at the tip of it, the same lighter hue that outlines the eyes in an egg shape. It has 2 flaps on its sides and a slender tail. Something that many new players don't know about the Stingray is that it is able to become the smallest animal in the game, given that it loses enough XP. For Christmas, the Stingray has got a big Santa hat above its eyes.

Levelling up is very easy: go for prey such as turtles. Make sure they do not go onto an island by electrocuting them. If they did then it is wise to stop trying as they can last forever in the island. If you are chasing Jellyfish, Squid, or other ocean animals that cannot climb hills, then it is even more straightforward: chase them and zap them repeatedly.

If there is a predator incoming, and they are very close to you, quickly, dive and use your ability. That will buy you a lot of time to easily escape. However, do not dive too early as the predator will know what you are doing and they will dive themselves. Especially when you see a Swordfish charging or a Pufferfish inflating, use it to stun and annoy them!

If kelp is on short supply for whatever reason, eat red mushrooms near Rivers. Mushroom bushes are also great XP suppliers.

A squid being chased by a Stingray.

Stingray with a shrimp. 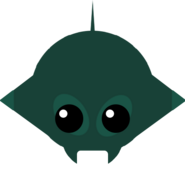 Stingray in the river. 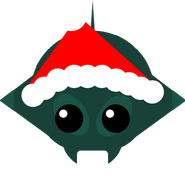 A Stingray with Winter skins. 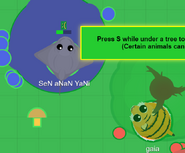 A Stingray trapped in a water spot.

A Stingray and a Manta Ray together.
Add a photo to this gallery

Retrieved from "https://mopeio.fandom.com/wiki/Stingray?oldid=84748"
Community content is available under CC-BY-SA unless otherwise noted.