UPGRADED to Squid!
Squids can use INK when injured (press W!)
+ you can hide in Red Berry bushes

Not to be confused with Octopi, a similar animal that spawns in the Ocean biome.

The Squid is the fifth ocean animal in Mope.io, and is the equivalent of the Deer, Flamingo, Reindeer and Gazelle.

The squid is a light turquoise animal, with a hue similar to the Dragon. It has 2 pairs of tentacles coming out of its front side, that have two suction pads underneath each tentacle. It also has a large, triangular tail with two flaps coming from each side of it.

If you are injured as a Squid, you can press W to squirt Ink, which slows and stuns other players for three seconds, allowing for a quick escape. However, Octopus are immune to squid ink, so it is best to avoid them, however getting eaten by an octopus is unlikely because they are likely to chase after players who have more XP.

The quickest way to level up is by biting a high-tier animal's tail (such as that of a Shark). It will be easier to follow a Shark or Killer Whale, since they would probably not bother you due to your minimal XP. If you do succeed, you can probably upgrade. If not, find a new predator. Like other lower ocean tiers, you can trail around a shark to scavenge off the meat pieces produced when it bites prey. This strategy will be a little more dangerous, in case the animal being bitten by the Shark turns out to be you. To avoid this, try look occupied and undisturbing; dive under land-masses whenever no other animals are around.

Healing stones are still somewhat-effective in this stage. However, in the next stage, healing stones would be useless unless you are injured, but even then you can just eat Kelp. If you see one, go for it to help the levelling up process. When a predator approaches, dive under the stone so that you can still leech XP off it and avoid being injured - don't use your ink ability unless you really have to. When your air gets low, run away.

If you want to try hunting prey, go for land animals such as Moles in water as they are all very slow in water (except for the Pigeon, which can fly, and the Pig, which is slightly faster than other land animals). On the flip-sie they have a very short diving time. As for water prey, Sea-horse and Trout have a boost ability to escape, Crabs can go on land, so Shrimp is the only animal that is easier. However, they give almost no XP, leaving the land animals on water the easiest and best prey to go for. 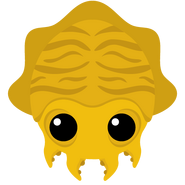 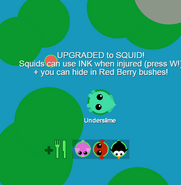 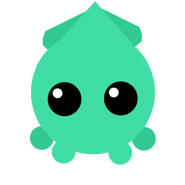 The squid with animal images turned off.

A Squid with a small Sea-horse. 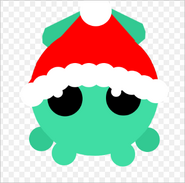 A Swordfish stunned by ink from a Squid.
Add a photo to this gallery

Retrieved from "https://mopeio.fandom.com/wiki/Squid?oldid=84719"
Community content is available under CC-BY-SA unless otherwise noted.