Social media or Social networks are platforms are used by the Developers of Mope.io to connect with fans, leak spoilers and send messages to the community about possible upcoming updates.

The Mope.io Official Subreddit is a forum commonly used by fans for discussions, gameplay suggestions, sharing art, and more. There are two different themes; the new theme which has a default reddit background, and the old theme, which has a Mope.io-related background including a 'Useful Links' section that features this Wiki. There is also a night mode theme that is simply the old theme, except darker. Posts from the developers

Mope.io Official Discord, also referred to as Mopecord, is a chatting site. Mope.io fans and developers are able to communicate there freely about Mope.io-related topics with the community. The invite link is here.

Mope.io official Twitter is also a platform in which the devs can post information about new updates, or mope.io related things. It is located here.

The King Of Agario YouTube channel, formerly known as Mope.io Dev King Of Agario,[1] has videos of new updates, spoilers and features KoA and Clickstan playing with fans. They currently have 74,300 subscribers. Additionally, 'MopeTubers' Fortish and SK are stated as the official partners of the Mope.io YouTube channel in the outros of some videos.[2] Fortish is sometimes seen in the channel's fan livestreams too. However, new update hints will be exclusive to 'Mope.io Official Stan', and KoA's channel will only be for fan content. KoA used to have another channel named 'King Of Agario', but it was switched with his son, Momo Gamer.[3]

Due to KOA and Stan having divided their channels, Stan's individual YouTube channel is now called 'Mope.io Dev Stan.' Officially announced on the Changelog on June 4 2020, the channel is yet to have content on it but presumably will have some soon, relating to new Mope content and updates.

Ooga Booga is a promotional channel for The BigFoot. It has trailers and livestreams of KoA as The BigFoot, with currently 1000+ subscribers. The link can be found here. Despite it centering around BigFoot, there have been newer videos featuring the BigFoot on Mope.io Official channel.

CommandoPro1, formerly used as the personal channel of King of Agario, has recently been taken over by his son, Momo Gamer on June 28, 2020.[3][4][5] Before their channel swap, KOA posted Mope.io videos and also some other gaming content. Since the swap, Momo has done Fortnite and Mope.io livestreams, for "enjoyment during the COVID-19 pandemic."[5] CommandoPro1's subscriber count currently stands at 15.1K, and the channel link is here.

Recently an official merchandise store was added on teespring.com with multiple mope.io-related products. It can be found at https://teespring.com/stores/mopeio-official. Some merchandise found there is clothes, pillows, tapestries phone cases and many others. The merch typically has a popular animal from the game such as the Dragon, Queen Celeste or The BigFoot. 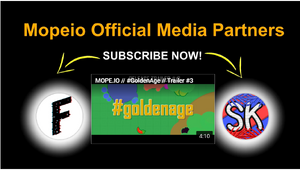 The older and newer profile pictures of Mope.io's YouTube channel (newer one has the latest Mouse skin).

Retrieved from "https://mopeio.fandom.com/wiki/Social_media?oldid=82220"
Community content is available under CC-BY-SA unless otherwise noted.