The Snail, formerly referred to as the Sea Snail is an AI animal that spawns in the Ocean.

The Snail is a small brown creature, with a circular shell. The shell is initially a light yellow color, but becomes darker around the left-hand side, where it eventually turns to a brown shade. The shell becomes a bit taller at this part too, and has a sort of groove around the bottom left-hand side. The Snail has two stalks which sport small, round, black eyes.

It can bite animal tails, so be wary if you are extremely low on health. The snail can defend itself with its shell, which may distract you and let other animals eat you. The Octopus can also disguise itself as a damaged fed snail, so be wary of those, especially if you see a snail eating another snail, as that can't happen normally. A good idea is to stun a snail before you eat it to see if it is an Octopus. If you are a low tiered animal such as a shrimp, you can push a snail out of the ocean and wait for it to die of thirst. Then, you can grab its meat and level up very quickly. Preferably go for newly-spawned snails, as they won't be as experienced and won't know to use their shell-ability. XP wise, there isn't a big difference between the amount snails can have at any given time. They all give a relatively similar amount of XP (unless it has killed another animal by tail-bite). The Pufferfish and the Swordfish's ability are good for killing snails easily. 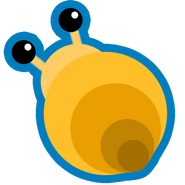 The original design of the snail.

A Shrimp near a snail.

Shark near a tiny snail. 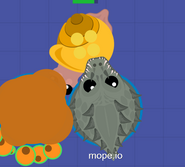 A Giant Crocodile dragging a Snail.
Add a photo to this gallery

Retrieved from "https://mopeio.fandom.com/wiki/Snail?oldid=79747"
Community content is available under CC-BY-SA unless otherwise noted.