UPGRADED TO SHARK!
A vicious predator of the oceans!

The Shark is the 12th Ocean animal in Mope.io, and is the equivalent of the Rhino, Eagle, Markhor, Wolverine and Bison. There is a new proposed version of the shark, which you can find in the gallery farther down the page.

Sharks are large, bluish-gray animals, featuring two oval pectoral fins and a triangular dorsal fin on top, as well as an extended snout with small white teeth. They also have a thin, vertical oval for a caudal fin. They have a slight resemblance to a Swordfish to a new player, though they aren't to be confused with!

Use your ability to attack your prey. Press them against a hill; this will force the animal to take extra damage from your bite. They should die within seconds. This also works if you push them against a wall and slide them down vertically. Another strategy is to force your prey out of the ocean, where they die of thirst. The best prey to target is Octopi, Swordfish and Pufferfish. Each gives a substantial quantity of XP, and aren't suited to being dragged onto Land. You can try to eat Pelicans, but they have a chance of escaping since they can go onto islands, and can go onto shore if you drag them there. You can also try find a Vulture near the desert shore and use your ability to drag it into the water. They will be slow there and it will be cold for them. They might be hard though seeing as they can climb islands and rocks.

A fun troll that will also give you some XP is to drag Desert or Arctic animals from either biome to the ocean. Desert animals will receive extra damage in the ocean's cold, but the latter biome's animals can be unpredictable - some can survive in the Land biome without burning. When dragging animals, particularly target non hill-climbers, as they are easier to trap. Animals such as Vultures and Polar Bears may not be easy targets, due to their climbing hills.

Avoid Krakens and Sea Monsters at ALL costs. You cannot do anything about Krakens because they are immune to your ability (as the biggest shark is smaller than a 1 million Kraken, so your ability is useless). It is better to be safe than sorry so do not attempt a tail-bite on a Kraken or Sea Monster.

If you see any animal from Shrimp to Sea Horse stalking you, shake them! They are probably trying to scavenge meat off of your ability, and after doing so will most likely not disturb you anymore. Also, when you shake an animal, try to eat the meat as fast as you can. Or you can be generous and allow them to eat some meat from prey if that's what they want. Your choice!

If you see a Shark near land, use your ability on them and shake them onto land. Try not to let them back into the ocean. If you have been pushed onto land by another Shark, make sure to only bite them if you aren't bleeding/stunned. If you are, the bite won't drag them around, but will only stun them too. If you're lucky, you'll be able to eat their meat.

If you are getting chased by Orca or Blue Whales, dive and look for a whirlpool to hide in. Never go near land as either of them can knock you into land with their ability. If either of these two predators are consistently following you, use your ability to stun them and try swimming away.

Tip: Dive under seaweed or kelp and ambush prey swimming above. This also works under Sandhills near the water's edge; when prey gets close, drag-bite them onto shore! They will be forced to either flee onto land where they'll die of thirst, or attempt to get back to shore. Physically push and hurt them to prevent survival. However, be wary that there are no predators around such as Killer Whales, Blue Whales or King Crabs, all of which can easily wash you ashore. 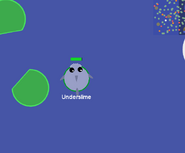 A Shark in a very empty Ocean near a Lilypad. 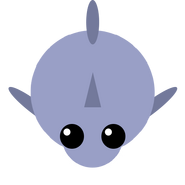 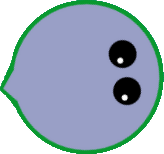 Appearance of the Shark with Low graphics Mode on.

A Winter Shark near some hills and an extremely tiny Killer Whale. 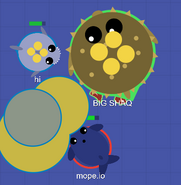 A Shark near a tiny Blue Whale and attacking an inflated Pufferfish. 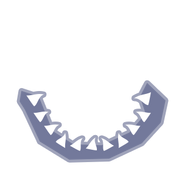 A hammerhead shark biting a Vulture.

A Shark with a Jack'o'lantern near a conch.

A Sea Monster near a Shark.
Add a photo to this gallery

Retrieved from "https://mopeio.fandom.com/wiki/Shark?oldid=80803"
Community content is available under CC-BY-SA unless otherwise noted.