Not to be confused with Kelp, another Ocean food with a similar appearance.

Seaweed is three green strands of ocean material that cling together. They seem to be slightly twisting a little. 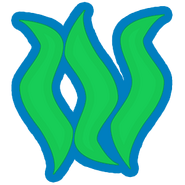 Some Seaweed near some conch shells, and a Jellyfish.

A freshly upgraded Shark near some seaweed.
Add a photo to this gallery

Retrieved from "https://mopeio.fandom.com/wiki/Seaweed?oldid=83761"
Community content is available under CC-BY-SA unless otherwise noted.