UPGRADED to Sea Monster!
Create a whirlpool to trap prey!

The Sea Monster is the 16th Ocean animal in Mope.io, and is the equivalent of the Land Monster, Ice Monster, Dino Monster, and Giant Scorpion.

It is a dirty green squid/dragon hybrid, with darker sides. Its head is a deformed snake-like dragon head, edged with small, sharp teeth. It has 3 tentacles on each side of its body, that go outwards. It has a spiky crown on its head with a flap of skin in between each spike. There are also spikes going vertically down its back and a big triangular spike at its tail. The Sea Monster's body is covered with spots on both sides, and eye-shadow is under the eyes.

Besides the air system and the walking on land without needing water, the sea monster works pretty much just as a higher tier version of The Kraken. It's best to stay underwater, and find Krakens, King Crabs or other apex tier animals, and pull them underwater to eat them. Beware of the Golden Eagle who will likely grab you and throw you out of the ocean. A way to avoid the Golden Eagle is to dive under when it's about to lift you up, and use your ability. The Golden Eagle will immediately get sucked in and can be eaten in one shot, even at full health. If it doesn't die, repeat and you will get a tasty rare meal. The same goes for Pakistan Vulture.

You can go to a lake to get some good XP by waiting under a Hill or Rock in the Ocean (if there is one) and then wait for prey to come by. However, avoid T-Rexes and Dino Monsters at all costs, as their abilities can prove to be fatal. When there are animals nearby, wait until they venture into the water and pounce! You can also find a 2 apexes in a 1v1 arena. Sneak under a hill or rock next to the arena, and use your whirlpool on them once the game is over. The apexes should not notice you as they will be focused on winning.

Beware of your monstrous equivalents (no pun intended), in particular the Ice Monster and the King Dragon. Ice Monsters will be able to kill you by using a few ice crystals, but Black Dragons shouldn't be a worry, as they will lose lava quickly. Even try to pull them back with your ability if a BD is low on lava. However, if there is a King Dragon in the server, avoid it at all costs. Because of how the Sea Monster works, it cannot dive infinitely under a healing stone, and will most likely succumb to the KD's over powered fire and tail-slaps.

You should also be wary of the T-REX, as they could be hazardous even deep in water. Their ability is overpowered and can damage you a lot on its own. If you are close to the water and you see a T-Rex, dive immediately as it will try dragging you on to the shore. It is safest to be deeper in the ocean as T-Rexes are slow there so you can easily get a free meal. If you don't react to a T-Rex by the water, it can easily drag you out of the water where you are slow.

Despite not doing much damage to equivalent monsters and predators, the Sea Monster can easily kill Lava-based animals. On the off chance that you see a Land Monster or Black Dragon near the ocean, use your whirlpool to keep it in the ocean. Killing Land Monsters this way shouldn't be too much of a challenge, but you must be more careful with Black Dragons. When sucking one into your whirlpool, try staying away from it as it can still damage you. Either way, the main goal is to isolate the aforementioned animals from any Healing Stones, or they will still survive. Other monster equivalents like Dino Monster and Giant Scorpion are also not too hard to kill, particularly the latter as it freezes in water. Dino Monsters are slow but can charge to make an escape, so use your whirlpool to keep them back.

A Sea Monster near a Shark, ready to eat it.

A Sea Monster wandering the ocean.

A Black Dragon stuck in the whirlpool.

A Sea Monster's whirlpool being used in a water spot. 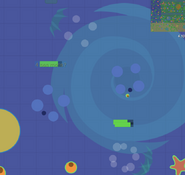 3 Sea Monsters in one Server! 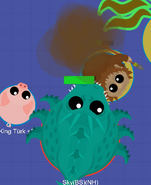 A Sea Monster travelling across a river.
Add a photo to this gallery

Retrieved from "https://mopeio.fandom.com/wiki/Sea_Monster?oldid=80093"
Community content is available under CC-BY-SA unless otherwise noted.