Rocks are impenetrable gray circles in Mope.io, similar to, but less common than hills. Most animals can't climb over them, even animals that are able to climb hills. The following animals can use them:

Even though some animals such as Bears, Polar Bears and Gorillas can climb over hills, most hill-climbers are still unable to climb over rocks. Rocks always are found on hills, which spawn in all biomes. 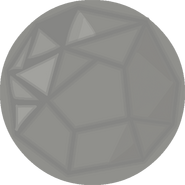 The part time design of the rock.

A Deer near a rock. 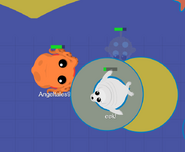 A Seal trapped on a rock!

The rare Black Lioness on a rock.

A Demon Fish in the ocean near a rock.

A rare Paki Toucan next to a T-Rex, a Black Lioness and a rock.
Add a photo to this gallery

Retrieved from "https://mopeio.fandom.com/wiki/Rock?oldid=83799"
Community content is available under CC-BY-SA unless otherwise noted.