Rivers are a pair of narrow regions found on the upper-middle and the lower-middle side of the map. There are two rivers connecting the Oceans. Each river has a current that pushes most animals and food in the direction of the current. Some animals, like Crocodile, Hippo, and Dragon aren't affected by the current. The two rivers have opposite currents; one goes from left to right and the other right to left. You will evolve easily if you make a circle around the rivers.They don't have sandy beaches, rather they have sharp sides. This has now been changed. The rivers will grow and shrink, showing sandy riverbeds when low. Food tends to spawn more in rivers, especially starfish. Food from both the land and ocean biomes can be found in the river. There's no point in going backward, as it conflicts with the river's current, but food does flow towards you if you do go against the current.

In the March 3 2020 update, River currents can shrink, to challenge animals crossing oceans. There is also sand on the edge of the rivers.

A Shrimp in the river.

a Blue Whale and a Trout swimming up the river.

The Snowman diving in a dried up river.

A Markhor crossing the new river. 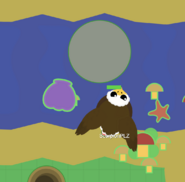 An Eagle flying above a river.

A Sea Monster crossing a river.

Retrieved from "https://mopeio.fandom.com/wiki/River?oldid=83098"
Community content is available under CC-BY-SA unless otherwise noted.