UPGRADED to Reindeer!
Press W to dig up food!
Your sharp hooves let you turn very well on ice!

Not to be confused with the Deer, the Land counterpart of the Reindeer with very similar traits.

The Reindeer is the 5th Arctic animal in Mope.io. It's the equivalent of the Deer, Squid, Flamingo and Gazelle.

The Reindeer looks like a brown circle, with a tan-ish head. It has fur details on the outside of its body, and it has magnificent horns coming from off of its head. It has two ears poking out from underneath the horns, and a rather fluffy tail. It also has two crescents resembling bones, and a skinny oval on its back between the horns.

The gold trim version isn't incredibly different structure-wise, but has a stark contrast from the normal skin. Its ears are perked a little higher, the larger eyes look slightly higher, and has a more boldly marked nose. Its golden underside reaches more outwards with pale blue spiny ice separating it from the tan fur. Its horns are golden, longer ,and thicker. Small icicles droop from the outer parts. Finally, the tail is golden.

The Musk Deer has the same physical structure as the deer, except its fur is a dark black. Its underbelly is a lighter gray. It also has two short, white fangs on its mouth, and unlike the regular reindeer no antlers on its head.

Unplayable, spawned only by Santa with his sleigh. The sleigh deer is more orange in color with tan horns that are sharper at the points. The eyes are closer together and slightly smaller and its ears have a curve to them. Its snout is thinner, striped with red. Around its neck is a red collar with several indented yellow bells. The deer wears an ochre harness and has a slim white underside. Its tail is white-tipped.

Unplayable, spawned only by Santa with his sleigh. Spawns once per sleigh. Rudolph is a rich brown color with smaller eyes like the sleigh deer. His ears are very dark, and his inner ear is beige. The end of his long snout is tan with a dark brown nose. He has a small highlight leading up to his nose. He has a tan ruff behind his head. His tawny antlers reach further outwards tangled a green cord tipped with colorful christmas lights. Rudolph has a dark brown tack lined with small yellow circles. The tack has a red ornate banner on his back. Rudolph's tail is longer than any other other skin's and has a tan border at the outer edge.

Try to dig up food to help level yourself up. The best place to dig food is at the middle of ice, as you can easily stop digging and run away if there is any danger nearby. Also eat cloudberries, raspberries, or brown mushrooms. Shoot water at the red mushrooms, too. However, the best strategy to levelling up is to find a Lake, and eat Ducklings, lilypads or/and Golden eggs, which are the best resources you can use to level up. Just be careful of other animals at the lake, as they might chase you away to keep the lake to themselves. Also, Ducklings can be hard to chase, but are worth it so pursue them if they run away.

Make sure to use your traction on ice to your advantage as most of your prey (and some predators) struggle to move and turn on ice quickly, making it easy to catch unsuspecting critters, namely Arctic Hares and Lemmings, but Seals and Penguins also have no grip. However, the latter to can slide on ice, but cannot turn well so there is a chance you can easily catch them.

If you're a Musk Deer, also take advantage of your skill to climb hills and rocks. Avoid low tier predators such as the Muskox and Arctic Fox, and climb rocks to evade the Sabertooth Tiger and Polar Bear. However, be aware that Markhors and Walruses can climb rocks too. Flee from Walruses on ice patches, and constantly change direction as Walruses are weaker in that area. Markhors will usually not target you due to low XP bonus, but there is still a chance that they will.

If you want to farm for food, go outside of the Arctic and dig food in a mud patch. You will dig up loads of lilypads and mushrooms, which you can eat in peace. Digging in lakes is also definitely a valid strategy option, but Ducks may eat your food, so go to the least populated lake if possible. 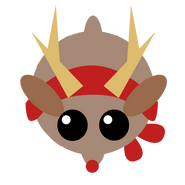 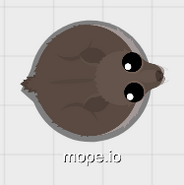 A freshly upgraded Reindeer next to a Snowball. 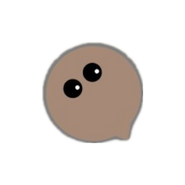 The Reindeer with old skins turned on. 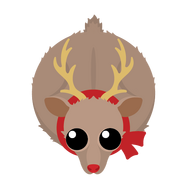 A rare musk deer on a rock.

A rare musk deer wandering around the arctic. 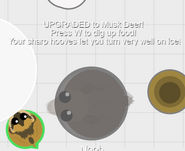 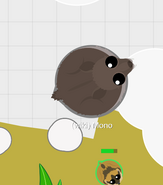 A Giant Musk Deer about to level up beside a lemming.

A Musk Deer near a fir tree that is supplying Arctic Nuts.

A Musk Deer with a Soccer Pumpkin.
Add a photo to this gallery

Retrieved from "https://mopeio.fandom.com/wiki/Reindeer?oldid=84762"
Community content is available under CC-BY-SA unless otherwise noted.