UPGRADED to PUFFERFISH!
(Hold W to inflate- become spiky, and dangerous to touch!)

The Pufferfish is the ninth Ocean animal in Mope.io, and is equivalent to the Gorilla, Snow Leopard, Toucan, Rattlesnake and Cheetah.

The Pufferfish is brown and oval-ish in shape. it has eyes looking to the left, and has two fins on each side, ovular in shape with two lines on each. When it is inflated, it becomes round and the spikes become much longer and stick way outwards, with its cheeks puffed up. When it's deflated, its spikes stick out less. The Yellow Pufferfish is the same as the regular Puffer, except its body is a golden-yellow color. Demon Pufferfish is purple also has an angry expression, and much longer, larger spikes, grown even larger when it inflates. Its flippers also look a little more webbed than the other species'.

Pufferfish is one of the best trolling animals because of their ability. If you see a high-ranked animal that is low on health, go near it and inflate. It will kill them if they are on very low health. If it did not kill them, try to finish them with a tail-bite or you can just let something else take the kill, or you can wait for your ability recharge to try again. One benefit of its ability is, you will be propelled backwards upon releasing the 'W' key, and will exhale multiple water droplets. This way, you can stay out of a predator's reach.

Beware of Krakens and Eagles as both of their abilities are VERY fatal, and also stop your own ability once they use theirs. Swordfishes are an additional hazard. Their charge causes high damage, and even though your ability will still damage them, theirs will inflict a lot more. If you see one, quickly press your ability and dive; the ability will activate before the diving mechanism so you will need to be quick.

The Demon Pufferfish is a lot more dangerous than the regular Puffer. If a predator merely bites you, it will be stunned for a little. The ability deals even more damage, taking near half of a predator's life in a single brief contact. Use this to your advantage. Try to find a predator, and ram into them. You might take some damage, but so will the predator. You can also do some chip damage by spitting Water at them, since your Water is poisonous. In addition, if the Demon Pufferfish is damaged, its ability will not cease. Due to this, predators might try to leave you alone, so try to treat them like prey. Note that if you DO die, you will cause bleeding to them for 7 seconds, giving less of a reason to be attacked.

The Golden/Yellow Puffer is the same as regular, except contact with it causes mild bleeding that will disconnect usage of a predator/prey's ability, and stuns a little longer. It's a little more accustomed to damaging prey. They aren't too rare, so if you get one, try following a predator around (ideally with low health). If you play safe and smart, you may be able to kill them. Yellow Puffers are safer to troll with since the ability delay for predators when stunned is a lot longer. You'll have approximately 4 seconds to dive.

If you want to play safe or there are no big animals on low health, use your ability and easily eat Stingray and other prey. Try to dodge their abilities.  However, arguably the best way to level up is by snails as they cannot run away and their ability cannot fight back in any way. Only 2-3 is needed to level up to the next animal. Clams and kelp are also great ways to level up. You can also eat Honey Bees. Multiple bees can often be found on the sea-shore. You can use your ability to stun and damage them, then quickly bite and eat them.

Pufferfishes are tricky to combat, since they're well adapted to defensive and offensive play. Regular Pufferfishes are mostly just a nuisance - they can be a threat at times but normally don't come close to it. The Demon and Yellow Puffers are different stories, though. However, if you're on extremely low health, avoid all Puffer species at all costs. They will try killing you if they see you on low health, and have a good chance of doing so.

Animals such as the Pelican or Eagle can carry all variants of Pufferfish away and out of the water. The mentioned animals can use their abilities not only to kill Puffers, but also make them their next meal.

Try to anticipate when a Pufferfish is about to use their ability - dive just before they do so, and stun them when the timing is opportune. A benefit of being against the Pufferfish is they have less health than other tier 9 related animals (regular only).

Yellow Puffers teamed up are a lot harder to deal with, as the bleeding will cause you not to be able to dive/use abilities while theirs can reload fast. If you're diving and they puff up, you can use stunning abilities to de-activate theirs. Simply biting them will still damage you, and isn't the best strategy.

Treat Demon Puffers as a predator. Their puffing is extremely harmful, and can take almost half of your health at once. Worse still, when hurt by a predator, the Demon Pufferfish's ability doesn't deactivate (this trait used to be shared by the common Pufferfish, but it was removed). All you can do to fight it is use abilities to keep them at bay. However, the Sea Monster can kill all Puffer types. If its whirlpool ability is activated, any Pufferfish's ability won't harm it, and the Sea Monster can thus kill any Puffer variant. If a Sea Monster kills a Demon Puffer, watch out for the residual bleeding that occurs. 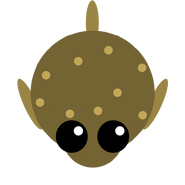 A pufferfish next to a hill 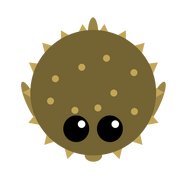 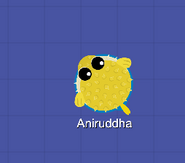 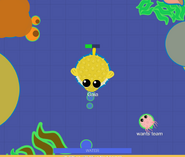 The even rarer Demon Puffer's ability.

A yellow pufferfish inflated beside some kelp and an island. 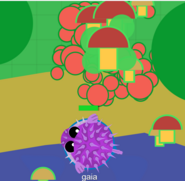 Demonfish near a mushroom bush.

Demonfish far out in the Desert, in a water spot and about to die.

A freshly upgraded Pufferfish stuck in a rainstorm.

Yet another freshly upgraded Demon Fish. Screenshot by Monotonously.

Another freshly upgraded Demon Fish near a rock. Screenshot by Monotonously
Add a photo to this gallery

Retrieved from "https://mopeio.fandom.com/wiki/Pufferfish?oldid=80177"
Community content is available under CC-BY-SA unless otherwise noted.