UPGRADED to Pterodactyl!
Fly and dive onto prey to pick it up!

The Pterodactyl is the 15th Desert animal in Mope.io. It's the equivalent of the Dragon, Kraken, Yeti, The Snowman, King Crab, T-REX, The BigFoot and Phoenix.

The Pterodactyl is a mostly peach-color creature with a pale beak with a black tip. On top of its head is a crest. In the center of its body is a darker pink, with two spines coming out. Its wings have bones as suggested by the game files, and its wings are a pale-pink-orange color.

Take advantage of your long flight by hanging around oceans waiting for Sharks or Orcas, and possibly Blue Whales to pass by in order to grab them. Since you have a long flight and almost all ocean animals lose water quickly, you can kill them in the air.Use your ability like an overpowered Eagle. Take Land animals (and Arctic animals if you can find them) and drop them in the middle of quicksand, where they will be extra-slow and their water will drain insanely fast. Boom. Easy meal.Use your ability to fly away from predators such as the Giant Scorpion and the Black Dragon, and use it to ambush and dive-bomb equivalents such as Dragons and T-Rexes.

Definitely go for fellow Apexes that have low water/energy, or that are on low health. Keep in mind that dropping animals on Venus Fly Traps will not work, since the #GoldenAge update. Additionally, your ability will not work on Krakens and King Crabs; it merely stuns them to prevent imbalances.

A cheeky strategy with catching prey is to hang around near a corner of the map, drop your prey in that corner. As soon as you land, make sure to block all escape for it. The stunning will effectively make the prey your next meal. Also, by spamming W as soon as you pick the animal up, they will be thrown a lot further than normal and receive increased damage.

Be wary of your energy as you lose energy very quickly if you pick up an animal or go outside the Desert. Make sure you're in an area with easily consumable foods. The Land biome has a lot of foods that are quickly consumed and will quickly regain your energy. After flying, be sure to recharge your energy bar, or you will become an easy target for T-REX, Giant Scorpion and Dino Monster. If being chased by Giant Scorpion, fly away before it stings you. If that happens, hide in a hole and wait for its ability to stop before flying away.

Many Dino Monsters will be in the desert too. If they see you, they’ll definitely try to kill you. If that happens, go on a rock to evade its ability until you are ready to use yours, then repeat. The same applies with T-Rexes, but you'll need to be completely on the other side of the hill, as they can grab you off of hills. Trap T-Rexes in a tight spot by dropping them where they cannot not escape and have NO access to water, when they are taking damage because of thirst. Pick and drop them, getting the exp. The best spot to do so will be in between three or more hills, however, there may not always be an opportunity to attempt this if the map structure isn't lucky enough to suit this possibility. 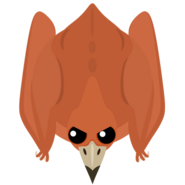 A Pterodactyl starting up its ability.

A Pterodactyl flying in the sky.

A lot of Pterodactyls.

An Octopus that's been dropped into a desert oasis by a Pterodactyl. 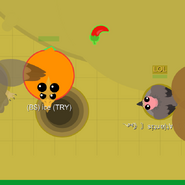 Glitched Golden Pterodactyl skin. (Probably was when it was early Golden Age)

A mini Dino Monster with an Emerald Pterodactyl.
Add a photo to this gallery

Retrieved from "https://mopeio.fandom.com/wiki/Pterodactyl?oldid=80483"
Community content is available under CC-BY-SA unless otherwise noted.