Not to be confused with Bear, Gobi Bear as they are similar animals, because they're all bears but spawn in different biomes.

The Polar Bear is the 11th Arctic animal in Mope.io, and is equivalent to the Crocodile, Lion, Falcon, Octopus, and Vulture.

The Polar Bear features a white circular body with a small, slightly stubby gray tail. Its head fur is a brighter white than the rest of its body, and the Polar Bear's eyes are rather large. The Polar Bear has a black button nose, and its fur is slightly tufted in some spots. In short, it is a white variation of the Bear.

Use you climbing ability to your advantage when you're attacking other animals. Wolves are your best bet if you want to obtain the most XP. Climb hills to overtake Wolves in spots that they will be disadvantaged due to less moving space. You are also fast in water, so you can use that to your advantage to chase them. However, the Wolf can howl by pressing W, stunning and biding them time. Because of this, if you are a fair distance away, try to dodge the howl if possible.

Even though many Arctic predators have a climbing ability, animals such as Mammoth and Wolverine do not have the ability, so stealing bites, slashing, dodging abilities, and running for the hills might be the best strategy in order to level up quickly. You however have to beware when you bite a Dragon, since they can fly over hills and breathe fire on you.

If you want to get crafty, go out of the artic and farm bees. They give loads of XP, and better, you aren't affected by their stings. However, you have to watch your water bar.  When you chase prey, try to chase them right into rocks, then slash! The prey will be forced onto the rock wall, and be sure to block all escape for it. This strategy is a 100% successful hunting technique, and it also works with the Gobi Bear, Bear and Sabertooth Tiger. Note that this strategy does not work for rock-climbers.

A freshly-upgraded Polar Bear next to a Hiding Hole. 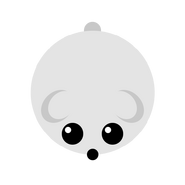 The Polar Bear in a Lake.
Add a photo to this gallery

Retrieved from "https://mopeio.fandom.com/wiki/Polar_Bear?oldid=84770"
Community content is available under CC-BY-SA unless otherwise noted.