The Pigeon is a second tier Land animal, and is equivalent to the Rabbit, Trout, Desert Chipmunk and Arctic Hare.

The Pigeon keeps a consistent shade of blue across its entire body, with the exception of its slightly lighter head. The Pigeon's wings have tips that are black with white outlines. The Pigeon has a grey-ish beak that leads into a white mark on its face. In typical mope.io fashion, the Pigeon has big, beady eyes, though it is the only animal other than Falcon with visible eye sockets.

The Dove has a relatively similar appearance to the regular Pigeon, except its body is white. Its body is a snowy white, and its wings are a darker white, almost very light gray. Each wing has a streak of snowy white on them. Its beak is very much the same as regular Pigeon.

Level up quickly by eating berries. You can find many of them in a Berry Bush, but another way to produce them is by pressing S into a Mushroom 4 times, and it will produce berries. Don't lose too much water! Use your ability to fly around, to help escape predators and look for food. A risky strategy is to farm carrots in the mud. Since you are slow there, watch out for Pigs. If there are pigs, go onto a hill and wait for the mud to dry before flying away! You can fly directly to a spot with a carrot too. Also try eating Honeycombs from a Beehive. Avoid the bees by flying away.

At this tier, prey isn't worth chasing, but if you see a Mouse or other animal that is on low health, or easy to eat, go for it.

As a Rare White Dove

Doves also have a crazy ability: they land faster than pigeons. You can use it to dive like a small Falcon. Use this advantage to bite predators' tails, then use your fast land speed to get onto a hill. The angry predator will chase you, but you can just stay on the hill and wait until your ability recharges before flying away. This does not go with predators who can climb.

Going to water will slow you down by 75%, so avoid ALL water spots unless needed.

Two Pigeons in a mud and water spot. 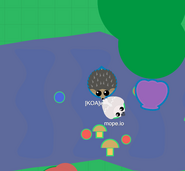 A Pigeon hanging out on a hill.

Two Doves right next to each other 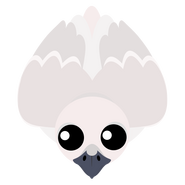 A dove in the Arctic. You can barely see it due to the white skin blending in with the white ground. 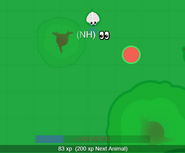 A Dove on low water.

A freshly upgraded rare white Dove.
Add a photo to this gallery

Retrieved from "https://mopeio.fandom.com/wiki/Pigeon?oldid=79714"
Community content is available under CC-BY-SA unless otherwise noted.