UPGRADED to The Phoenix!
Phoenix shoot powerful fire tornadoes to burn their alive prey to death!

The Phoenix is a tier 15 Lava animal. It is the equivalent of the Dragon, T-REX, The BigFoot, The Kraken, King Crab, Yeti, The Snowman and Pterodactyl.

If you were to remove the wings and fancy tail, the Phoenix would simply look like an orange circle with a tail and a beak. However, the wings have designs that looks like fire and nothing else, and its tail has a flame decal for extra decoration. Its wings and tail also have a ripple effect to make them seem like they are made of fire.

The Golden Phoenix is a lighter colored Phoenix, that looks up slightly higher and has golden fire.

The Alpha Phoenix is a Golden Phoenix that is cerulean and has cerulean fire. At a closer glance it has a thin lighter blue ring around its eyes. It has a large highlight on its head and its eyes are slightly further apart from the Golden Phoenix.

The Aqua Phoenix is blue like the Alpha Phoenix but is much brighter in color. The flame patterns are instead rounded like bubbles. It looks much more rounded than the other skins.

The Ash Phoenix is ash gray. The fire on its wings is darker, nearly black, more curved, and slightly resembles claws. The fire on its tail is much smaller with two main rounded flames on each side. The Ash Phoenix's head looks less feathery. Its eyes are narrowed with a pale blue outer ring, and its beak is flatter with icy blue nostrils. There's a slight tuft of feathers beneath the beak.

The Giant Red Phoenix is dark red with angular wings that reach outwards. It has a darker pattern on its tail and a smaller maroon head. Its beak is blood red.

The Ice Phoenix is a little narrow. Primarily gray with darker wings, the fire on the wings is icy blue. The base of the tail flames is also icy blue, although the flames themselves are the same color as the wings. The beak is bright blue. The Ice Phoenix looks more geometric than the other skins.

When you are a Phoenix, go around looking for prey, and use your speed to catch your prey. When you hit your prey, they will be set on fire, so that will help you kill them. If the fire kills them, grab the Meat before anyone else can. However, other players at the volcano will often try stealing your food, so be very careful around other lava-based animals.If the Volcano is too crowded with Phoenixes, Land Monsters, Black Dragons or even a King Dragon, you can try relocating to the Desert, although it is risky.

Since there are lava patches in the Desert, you can survive there. When in the Desert, damage Pterodactyls with your tornadoes, to prevent them from flying and picking you up. If you do see a large Pterodactyl in the air and potentially about to fly you away, hide in a Hiding Hole. When in the desert, avoid Giant Scorpions since their ability can damage you, and they can also go on lava. Then, you have to dash to the nearest hiding hole. To easily avoid the stinging animal, go into a lava patch and dive! You have a super lava diving time, and if the Scorpion still refuses to leave, burn it with a fire tornado. Dino Monsters may also be a hazard. However they are easier to avoid; simply hide from them in a Lava patch. When fighting a fellow apex tier, summon as many Fire Tornadoes as you can, to cause extra damage and prevent them from using their special abilities (unless they are instant-use ones).

Now that your ability can damage Dragons, you can attempt fighting them. Have a tornado ready and shoot it whenever possible, and try to get good tail-bites in. The tornadoes can be used in hiding holes too. Doing this will result in lots of damage being done to the Dragon. Do not go into a hiding hole unless you are low health when you do, since your tornado will die. Do not go to water either, as you are very slow at water, and also cannot dive. plus the Fire Tornadoes will lose health quickly. However, you should also avoid the T-REX. It is not as easy to deal with compared to Dragons, and its ability can cause a huge amount of damage to you, and can even drag you away from lava if you're near it. Also don't fight a King Crab. King Crabs are also quite dangerous, as their ability does massive damage. It's best to simply fire multiple tornadoes at it, and then try to kill it when the tornadoes gradually reduce its health to almost nothing. That way, you can also stop the Crab from using its ability if it's on fire.

With a Yeti, lead it close to the Volcano. The Yeti will be burnt by the searing heat of the volcano, and you will get a free meal. However, if you are in the Land biome, don't try fighting one unless it's at low health, as freeze does massive damage to phoenixes.

If you happen to meet a Kraken somewhere in the ocean, SCRAM!!! The Kraken can easily kill you alone in the ocean, due to its ability doing massive damage and stunning. However, if you see one in the River or in a Lake, make it resurface, and push it onto Land. The Kraken will lose water insanely fast and when it is at minimum health, stalk it from the back and bite its tail and kill it. However, if it is in an Oasis, don't fight it. You are extremely slow in them, plus you can't dive. Then, it will be YOUR turn to die from the Kraken’s whirlpool.

If multiple people are teaming on you, create a fire tornado and allow it to act as a distraction and a form of attack. Always play defensively when being teamed on to prevent yourself from dying too, which means protecting your tail. Fire tornadoes can also be used to make people who are following you go away, and to help you attack other Phoenixes. Try to temporarily team up with other animals in your situation to have a higher chance of escaping.

Try to avoid the Monsters, especially the Land Monster as it will spend most of its time near lava sources. If your internet isn't so good, make sure to keep away from any other Phoenix, no matter if they are teaming with you or not, to avoid lag.

A coin farming strategy is to get an auto-clicker. Set it to around every ten seconds. Go in a hole at the volcano, this way you won't lose lava. Start your auto-clicker and go AFK. This is not particularly efficient, but the good thing is that you don't have to do anything. 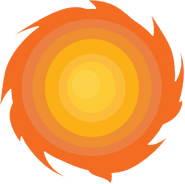 A Phoenix launching a Fire Tornado to target a Black Dragon.

An Alpha Phoenix above another phoenix diving in the lava.

A Phoenix in a 'lakecano'. 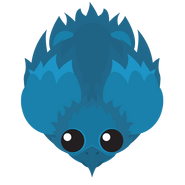 A large Golden Phoenix by itself at the Volcano.
Add a photo to this gallery

Before the #GoldenAge update, the Phoenix was criticised due to its excessive lava loss when leaving the Volcano, especially since it's an apex animal.

After the #GoldenAge update when the Desert was adjusted to acquire Lava animals, the Phoenix was now extremely overpowered. It would hardly lose lava in the Desert, and the fire tornadoes were now able to move extremely fast and were hard to escape; particularly, the Phoenix made the Pterodactyl practically unplayable due to the fire stopping them from using the flying ability, and being able to damage them a lot.

Later on, the Developers made some nerfs for the Phoenix, making it have longer boost intervals, losing lava overtime unless in a lava spot, having a shorter diving time in lava and making the Tornadoes being a little slower, making it a mediocre Lava animal, but somewhat unplayable in the Desert due to Giant Scorpions and Dino Monsters easily being able to overtake the Phoenix and kill it from low lava loss.

The animal is based off 'φοῖνιξ' (Ancient Greek: Phoenix). The word written with Latin code language form is 'phoînix', Middle english is 'phenix' and old English: fēnix See Phoenix on Wikipedia for extra details. The Phoenix is a legendary bird from Greek Mythology that was orange with red and with living flames on it. They can turn into ash when threatened, and also do so when they are extremely old. They then go through the process of rebirth. It is considered that the Phoenix was the bird of the sun and can't be killed by fire (these traits will most likely not be added in the mope.io Phoenix, as it would be too overpowered).

Retrieved from "https://mopeio.fandom.com/wiki/Phoenix?oldid=84714"
Community content is available under CC-BY-SA unless otherwise noted.