The Pear is a food source in Mope.io that spawns in the Land and Arctic biomes, and was added on.

The Pear is a green fruit, that looks like a lopsided oval. It is round around the bottom, and gets thinner near the stem. The stem is small, brown and slightly curved. 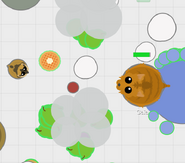 A Sabertooth Tiger near two Arctic bushes that are abundant in pears.
Add a photo to this gallery

Retrieved from "https://mopeio.fandom.com/wiki/Pear?oldid=81546"
Community content is available under CC-BY-SA unless otherwise noted.