UPGRADED to Octopus!
Hold W to use your 'Disguise' ability!
(Hint: wait for prey to bite you - they get stunned!)

Not to be confused with Squid, a similar animal that spawns in the Ocean biome.

The Octopus is the eleventh Ocean Animal in Mope.io. It's the equivalent of the Crocodile, Polar Bear, Falcon, Lion and Vulture.

The octopus is rounded (having most of its body parts circular) and orange in color. Similar to Squids and Krakens, an Octopus' tail is located on its head, albeit rounded and pointed. It has four pairs of tentacles appearing on each side. Around it's "tail", some designs are apparent mimicking an octopus' texture in reality.

Due to their ability, octopuses can change their appearance, from seaweeds and kelps, to snails and whirlpools which can be used for both tricking prey and escaping predators.

The Octopus' disguise ability is very useful for catching prey, and it's ink immunity makes it very useful against Squids, which could otherwise slow you down when fleeing from predators. It is only worth using in an area that has at least a few people, otherwise waiting for ages will prove fruitless. When using the ability, movement will be slowed, so be careful when around predators. You can use your ability to stun snails from going into its shell by going next to its head. The snail will be stunned and you do not have to worry about it going into its shell.

If your disguise is Kelp, Whirlpool, Frogs, Hill, Swordfish, Pelican, or Plankton, you probably should just go back to undisguised form as these either do not attract prey (Hill, swordfish, or pelican), or they look very unrealistic(much bigger or smaller than the regular form). Staying in disguised form will slow you down, make your ability not able to recharge, and will not give you anything. However, there is still a chance someone might not recognise it as a disguise. If your disguise is Snail, try to stay away from Kelps, Starfish, Plankton Bushes, or Clams as normal Snails cannot eat these foods/go through these items. Instead, mimmick other snails to trick Stingrays and above animals. Also, since your name will still show, try to hide it by going near a Hill.

If you see a predator and you are in disguise form, don't panick. Try to trick them if you are in disguise before they can be seen on your screen. If you disguised after they can be seen on your screen, they will not be tricked and proceed to using their abilities. If that is the case, either dive or undisguise and run away(as disguise slow your speed). If you are getting chased by Shark, Orca, or Blue Whale, and they are very close (near bite range), use your disguise ability suddenly. They may not expect it and they will bite, which will make them inked, giving you time to escape. However, beware of Sharks or Krakens who you suspect its ability is recharged. Additionally, some people may recognise your disguise as merely an illusion (e.g. the Octopus whirlpool disguise is smaller than regular whirlpool size). If you've seen the predator before, and if they've seen your name as an Octopus, they may recognise your disguise.

The one predator you should always beware is Eagles. If an Eagle uses its ability on you, your ink ability will do nothing to prevent the flying ability from activating. It's best to dive and wait for the Eagle to go away if you see one, otherwise it will carry you out of sea and eat you. Also, avoid Crocodile. If you're near the shore and you see a Crocodile, dive immediately. The Crocodile is able to drag its equivalents, so it could easily drag you out to the Land. Because of these two animals, it would be best to stay away from the shore.

Farm safely by eating Seaweed and Snails, and if you see a Beehive in the ocean, eat Honey Bees. Also try using your ink to stun Honey Bees on the shore.

An Octopus with Old Skins activated. 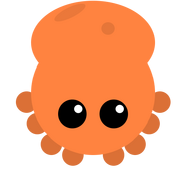 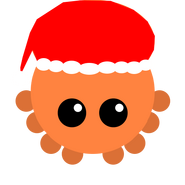 A Winter Skin of the Octopus.

An Octopus disguised as a Lilypad.

Octopus disguise as a Stingray. 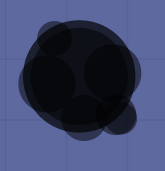 An Octopus in a Desert Oasis for whatever reason, and about to be eaten by a T-REX.

An Eagle carrying an octopus out of the ocean.
Add a photo to this gallery

Retrieved from "https://mopeio.fandom.com/wiki/Octopus?oldid=84752"
Community content is available under CC-BY-SA unless otherwise noted.