Not to be confused with the Red Mushroom, the mushroom that appears to be on mushroom bushes, but also spawns as a separate food. Or the bush, a non-solid entity that can spawn other food sources in it.

Mushroom Bushes are food sources that spawn in the Land biome

The Mushroom Bush looks like a Red Mushroom inside a Bush, and Mushrooms will spawn around it.

A mushroom bush on a beach, near some water and a Desert Tree]. 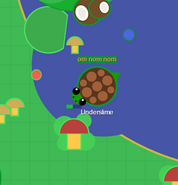 A Turtle enjoying a Mushroom Bush.
Add a photo to this gallery

Retrieved from "https://mopeio.fandom.com/wiki/Mushroom_Bush?oldid=80091"
Community content is available under CC-BY-SA unless otherwise noted.