Mud is a brown-colored terrain source in Mope.io that is exclusive to the Land biome, and host to a number of sub-terrains and food sources.

Mud patches are large brown circles, with uneven splotches of mud scattered around the edge of said circles. Multiple terrain and food items, most commonly hills, rocks, mushrooms, water spots and carrots, can be seen too.

A patch of mud.

A Mouse next to a cave in a patch of mud.

A Pig in a patch of mud next to some mushrooms and carrots.

A pumpkin that is currently owned by a Crocodile who is in the mud. 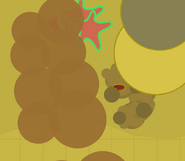 A Komodo Dragon diving in mud created by a Meerkat's special ability.
Add a photo to this gallery

Retrieved from "https://mopeio.fandom.com/wiki/Mud?oldid=84537"
Community content is available under CC-BY-SA unless otherwise noted.