You're a tiny mouse- Eat food to grow!

Not to be confused with Mouse (food), an unplayable AI animal that was removed from the game.

The Mouse is the first Land animal in Mope.io, and equivalent to the Shrimp, Chipmunk, and the Desert Rat.

The Mouse is one of the simplest animals due to its lack of abilities, as well as the smallest - only freshly upgraded Rabbits, Trout, and Arctic Hares are slightly smaller. It is one of the only Animals without a tail that can be bitten, the only others being the Shrimp, Desert Chipmunk, Rabbit, Trout, Arctic Hare, and Crab. Its base is dark gray and has a brighter head. It's head features a triangular snout with a gray-pink rounded nose with freckles around it. It also has black eyes, gray ears, and a gray-pink tail.

The Purple and Gold Mouse have bigger eyes, but the Golden Mouse has gold fur, and the Purple Mouse has purple fur.

The best way to upgrade is to find mushrooms and press the S key to shoot water into them. Once shooting an adequate amount, they will get bigger and bigger until they've turned into lots of berries you can eat. It should take about four water droplets for the mushroom to turn into berries. You should keep doing this until you upgrade. Try to use up all your water on mushrooms before you upgrade, as the water bar automatically resets to full once you’ve upgraded. Try not to shoot at red mushrooms, as they give less food in return. When low in the water, look for a water spot as that is usually the best way to regain water. Another approach to leveling up is by using a healing stone. Predators will normally not bother trying to eat you, as mice are relatively low in XP. However, you can be killed in 3 bites, and are slow in mud, water, and everywhere else without any abilities, so be wary. When chased, try to fit in gaps where the predator cannot, or wait the predator out in a hiding hole. Avoid the mud at all costs, as both Rabbits, Chickens and Pigs travel faster than mice there. Yet another strategy is to go to a beehive with a tier 7 animal or higher also eating from it. After they feast on the bees, you can eat the honeycombs they leave behind.

A mouse under a tree

A mouse eating a honeycomb next a falcon

A Mouse next to a Black Dragon 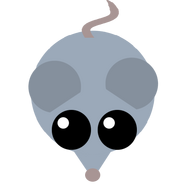 The mouse's original appearance (It hasn't changed much).

The mouse with animal images turned off.

A mouse that had discovered a huge Berry Bush.

A damaged Mouse running into a big Hiding Hole. 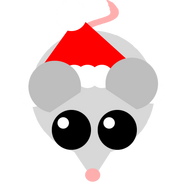 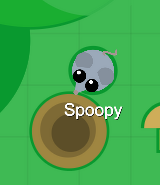 A Mouse going into a small Hiding Hole.

Two Mice and a Donkey at a Healing Stone.

A Mouse next to a River. 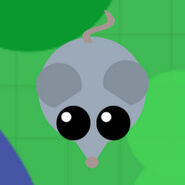 A mouse in the midst of bush and hill.

A little mouse in the ocean.

A mouse stuck in a rainstorm.

A Mouse chatting with a Golden Dragon.

A tiny mouse being engulfed by a Tsunami, with an Eagle, Stingray and a Trout.

A Purple Mouse near a berry bush.
Add a photo to this gallery

Retrieved from "https://mopeio.fandom.com/wiki/Mouse?oldid=84691"
Community content is available under CC-BY-SA unless otherwise noted.