Mope.io Mobile is a version of Mope.io that allows you to conveniently play the game on a mobile device, either on the App Store or Google Play. While most aspects of Mope.io, such as animals, biomes, etc. are unaffected on mobile mode, there are some slightly different controls on it.

Accounts and the Beta game mode are not accessible while on mobile.

A Komodo Dragon in mobile mode. 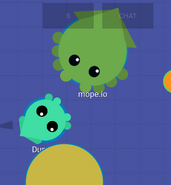 Squid in mobile mode.
Add a photo to this gallery

In the reviews of Mope.io Mobile, most reviewers found common faults in frequent disconnections that occurred whilst playing. Most reviewers[1] praised the general concept of Mope.io, with the average rating being 3.5. However, they lowered their review quality due to lag interrupting them mid-game, and causing it to be unplayable and extremely frustrating to lose a lot of XP. Clickstan responded to this by stating that Addicting Games will fix these bugs, and add extra features to Mobile such as accounts, quests, etc.[2]

Retrieved from "https://mopeio.fandom.com/wiki/Mope.io_Mobile?oldid=79609"
Community content is available under CC-BY-SA unless otherwise noted.