UPGRADED to MOLE!
Hold W to dig underground!
Go under anything, do surprise attacks!

The Mole is the third Land animal in Mope.io, and the land equivalent of the Chicken, Crab, Meerkat and Penguin.

They are a dark shade of grey, with a bright pink nose and slightly darker pink paws; on that note, they are also the first animal in the game to have their paws visible.

Dig underground to sneakily move around. You can surprise prey by going underneath a hill/Berry Bush, and popping out to damage them when the time is opportune. Also dig underneath predators; tail-bite them, by emerging right under their tail.

If the opposite happens and you're being chased by a predator, dig underground, all the way to the closest hiding hole. You can dig near mud, but try to avoid it as you will be slow above ground in there, and if you accidentally emerge, Pigs could eat you.

To play safe, farm berries by pressing 'S' onto brown Mushrooms, about 4 times on each. You can also go to a nearby Lake to eat Eggs.

You can also try get a sneaky tail-bite on your opponents. Dig underneath them, and when they're not watching, get a quick tailbite off! If they don't turn around, try it again! Maybe if you're lucky enough you can get a level-up! 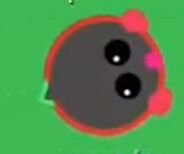 A hostile Mole with Animal Images turned off.

A Mole with Old Skins activated. 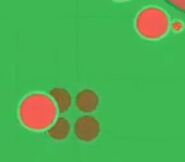 An Old Mole digging under a Berry. 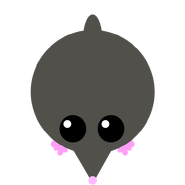 Two Moles trying to get a drop of Water.

A constrained Mole stuck between two Hills and a Berry Bush.

A digging Mole.
Add a photo to this gallery

Retrieved from "https://mopeio.fandom.com/wiki/Mole?oldid=80109"
Community content is available under CC-BY-SA unless otherwise noted.