Meat (shown in the T-REX note) is a food item in mope.io. It can be spawned when an animal dies of any natural causes. This can include thirst, fire, disconnection, freezing, etc. The more XP an animal has when it dies, the more meat is produced. There are three types of meat: small meat, which can be eaten by Mouse+, medium meat, which can be eaten by Fox+, and Big flesh, which can be eaten by all animals from Crocodile tier and above. When being bite-dragged by a T-REX or Shark, meat pieces fall off the animal. For Sharks, a large quantity of small meat pieces will spawn around the animal that's being dragged. For T-Rex, a maximum of 3 pieces of meat will spawn. Depending on the animal that's dragged by the Rex, small or medium meat will appear. Carcasses also drop tiny meat when bitten. In infection game mode, zombies drop rotten meat that infects you when eaten.

As one of the best foods in mope.io, if you find any meat lying there, EAT IT! (Unless you can't eat it. Also, DON'T do this when there's predators around) Meat gives a bunch of XP, especially large meat. A way to get meat is that you can wait prey out in Hiding holes until they die of thirst. However, that is very inefficient and meat give you less XP than eating it anyways, plus meat can be stolen. So the better way is to pretend to give out tailbites or act a.f.k. It's best to leave animals alone if they don't come out for long periods of time.

Meat is usually found in the artic, so that biome is also good for finding meat. The desert and ocean are also top meat producers. So, the next time you play Mope.io, get supplied, and set off on a massive meat hunt!

Leave the prey alone if they are not coming out for a long time. However, the waiting them to die of thirst can be used if the prey is low on water. You can find often find meat in the arctic from ocean or land animals freezing to death. If you are a low-tiered ocean animal, try pushing snails out of the ocean so they drop meat, which level you up very fast. 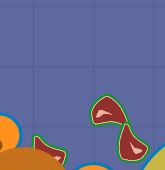 Meat in the ocean. 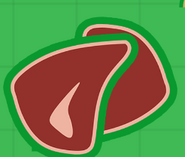 Meat in the Volcano. 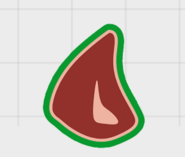 A piece of Meat in the Arctic. 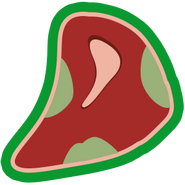 A rare White Lion on a hill near some meat.
Add a photo to this gallery

Retrieved from "https://mopeio.fandom.com/wiki/Meat?oldid=84151"
Community content is available under CC-BY-SA unless otherwise noted.