UPGRADED to Mammoth!
Press W to roll snowballs with your trunk!
The bigger the snowball gets, the longer the freeze!

The Mammoth is the 14th Arctic animal in Mope.io, and is equivalent to the Elephant, Cassowary, Giant Spider, Blackwidow Spider and Blue Whale.

The Mammoth is a dark, almost orange-brown with small, dark ears. Its tail - though long - is thin, and is tufted with a darker clump of hair. Its trunk is striped, and two cream-colored tusks point outwards on either side of it.

Mammoths can run on ice normally unlike the Snow Leopard and other animals without a special ability to adapt to the Arctic biome. Use it as an advantage to eat prey that usually lives in Land, and use the Snowball Ability to freeze the prey when you are near to them or on ice, too.

Eat Sabertooth Tigers to gain XP easily. Mammoths are the one the fastest animals in the Arctic. As the January 21st Update has increased its swimming speed and also bring a bunch load of Snowballs in the Arctic. Now you don't need to worry about the food source problem anymore and you can earn XP freely.

Beware the predators that are larger than you—like Dragon, Kraken and The Yeti; Dragons could breathe fire and could also even hurt a lot. If you are being chased by Dragons, you need to make sure you can use the Snowball ability to slow them down, this grants you some time to run away from the predators before they recover from the Snowball again. If a fireball comes at you, try to dodge it.

If you are willing to take risks, Mammoth snowballs take a lot of health away from the Dragon, Kraken]], and The Yeti though the cool-down time of the snowball might set you back a bit. You can fight them off this way, but just beware that you have a high risk of being eaten. The Kraken being the easiest, as it will 1, die of thirst, 2, it freezes in the Arctic, and 3, if the Kraken is near water, snowballs will stun it disallowing it to reach it and will collapse into meat in no time. The Dragon, however, is a step harder. This time it doesn't run out of water quickly and has fire. Stay in a Hiding Hole, and when you have the chance, tail-bite it, and roll a snowball at it. It will eventually freeze to death. Fighting a Yeti is pretty easy. Create some distance between you and the Yeti, then start barraging it with snowballs. It will eventually die. If it runs away, chase it, and perhaps take a risk by offering a kill when you don't actually mean it...

It also best to find an arctic lake and use your ability to slow down the ducks as they approach, you can also do so when they spawn so you can get a head start!

A freshly upgraded Mammoth on a patch of ice near a snowball.

A Mammoth eating a mushroom Bush in a lake with a Hippo.

A frozen Mammoth swimming to a island. 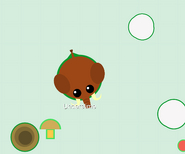 A Mammoth near some snowballs.

Mammoth with a Seal and Sabertooth Tiger 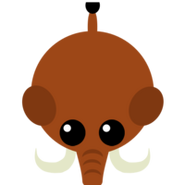 A mammoth with a rare golden pumpkin.
Add a photo to this gallery

Retrieved from "https://mopeio.fandom.com/wiki/Mammoth?oldid=82093"
Community content is available under CC-BY-SA unless otherwise noted.