Lava is found at the center of the map in the Volcano. Lava will burn any animal except for the Dragon, Black Dragon, King Dragon, Land Monster, Phoenix, Giant Scorpion Pakistani Toucans, or Lava Toucans. Big Healing Stones occasionally appear surrounded by lava, making low tier animals question themselves about the risk-reward situation.

There is also a Lava Bar, which is currently exclusive to the Black Dragon, King Dragon, Land Monster, Lava Toucan, and the Phoenix. When the Lava Bar reaches 1/4 of its total, it will start reminding the player to go to the Lava Biome to replenish his or her lava supply. If the bar completely depletes, then the Black Dragon loses about 5% of its HP per second. There is a risk of running into a Black Dragon, so you must be wary unless you are an animal that the Black Dragon cannot eat.

The volcano can erupt; at this time no animals can enter the volcano's core, and lava will spew from all directions.

A Rabbit taking a dip in the lava.

A Mouse at the center of the Volcano, next to a Fox on a giant Healing Stone.

A vulture taking a dip in the lava to get in contact with a Healing Stone. 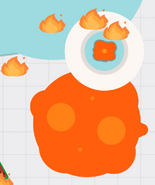 Lava in the Arctic caused by an Arctic Volcano!
Add a photo to this gallery

Retrieved from "https://mopeio.fandom.com/wiki/Lava?oldid=82964"
Community content is available under CC-BY-SA unless otherwise noted.