The Land Monster is one of the most complex animals. Mostly red, it has an oval shape with lighter red spikes on the side. It has two small nostrils on its nose, and a stripe on it. It has spikes on its back and tail, similar to that of the Black Dragon, but its spikes are more curved. Its two wings fold in on either side of the large devil horns that are above two narrowed eyes which are inside lighter sockets.

The Golden Land Monster is similar to the normal Land Monster, but it has more detail and is golden. It also looks slightly down.

The Titanite Monster is bigger, greener and spikier. It’s meant to resemble titanite. It has large, curved spikes on the front sides of its body.

As a Land Monster

Search for Dragon, Phoenix and other apex tier animals like T-REX and try to eat them with your ability. You can also eat lower tier animals like Bison and Elephants and spit fire at them using S. This will decrease your lava bar, but it will set your prey on fire and burn them. If you bar is low on lava, try to go back to the Volcano as quickly as possible. If there is a Black Dragon in the server, then don't go to the Volcano unless the Black Dragon is not there. The Black Dragon will most likely try to kill you if you go there (especially when he needs to kill you for King Dragon), and your ability won't help with that. When it chases you, try to get to a Hiding Hole.

If the Black Dragon is hogging the volcano, you can relocate to the Desert. There are multiple patches of lava there, which you can use to refill if you are getting low on lava. Since the Black Dragon can't get any lava from these patches, it's also a lot safer. You can roam the Desert and eat Bison, Komodo Dragons and Blackwidow Spiders. Pterodactyls can be a little harder to catch since they can fly.Phoenixes may also occupy the Desert. A strategy is to camp at a lava patch, and wait for one to approach. Then when it's close enough, come out and use your ability. Easy meal! The Desert in general will have a lot more prey, as animals will want to eat the XP-rich desert plants. You can also try a trick to capture prey easily, spam 'FREE BITES' and when prey is close enough, turn around and use your ability. Bite the prey so it can't be stunned and step to the side to let prey sink to the center of the hole, where it cannot escape. Therefore, it's an easy environment to thrive in. However, don't walk on Quicksand or any oases, as you're slower there. Giant Scorpions might be there too, and you can't fight back with you ability. So when it is about to sting you, dive or use your ability on it, it will eventually get bored.

You shouldn’t try to kill your monstrous equivalents (no pun intended), as the chances that you will kill them are pretty small because of your ability's ineffectiveness on equivalents, as Sea Monster can trap you underwater, Dino Monster can toss you far from the volcano and Ice Monster can freeze you. Your only chance is the 1v1 arena. The Land Monster is most suited for the 1v1 arena because of it's slender shape.

Against a Land Monster

Avoid being nearby any Land Monsters if you're prey, as it can suck you into its sinkhole and eat you. The best way to kill a Land Monster is by drawing it away from the lava. If you see one in the Desert, try to trick it into going near the ocean. As a T-REX, you can lure it near, and (preferably with the help of another Rex) you can drag it far out to sea, where it will quickly lose lava. Animals such as the Yeti have quite effective abilities against the Land Monster, the freeze ability being a polar opposite combat (no pun intended). Other apexes aren't able to kill Land Monsters as easily. The Land Monster thrives in close contact with prey, so just make sure you stay out of its reach. Constantly flying can be a disadvantage for it as well - you can hide under a Tree, because the monster will fly over it. If your animal is a tree-climber, try using your ability on it while on a tree. Whilst directly above the tree, the Land Monster is unable to damage the ability-inflicter, and may receive damage, which is always good (depends on ability).

While being great at offense and killing prey, the Land Monster is not a high-achiever in defensive skills. Though the sinkhole can delay other monsters and Black Dragons from inflicting damage on it, the ability has no added bonus such as damage. Additionally, the Land Monster is unable to go in hiding holes while its ability is in use. As a Dino Monster, you can press W and knock the Land Monster far away from the Volcano/Desert.

2 Land Monsters in the volcano.

A mini Land Monster ruling the volcano. Screenshot by Ocaveraryna.

Another Land Monster near a river. Screenshot by Ocaveraryna. 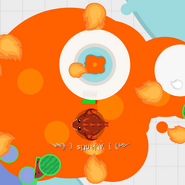 A mini Land Monster in an Arctic Volcano. Screenshot by Ocaveraryna.

Land Monster sucking up an Eagle in its sinkhole.

A mini Land Monster.
Add a photo to this gallery

Around March 2020, Land Monster and Kraken both had their abilities nerfed: they had little to no suction power. They went under criticism for being unplayable, with prey being able to escape the hole with ease even if they were far down.

In the big update to Beta on June 24 2020, the Land Monster was nerfed again due to its sinkhole ability being extremely overpowered this time. From a long range, it could suck in animals that under normal circumstances would remain unharmed from their distance. Currently KoA is working to fix it.

Retrieved from "https://mopeio.fandom.com/wiki/Land_Monster?oldid=84715"
Community content is available under CC-BY-SA unless otherwise noted.