The Land biome is one of the four main biomes currently existing Mope.io, alongside the Ocean, Arctic and Desert. It is a large land-mass at the center of the map, with many sub-terrain that can house many varieties of animals, and has been around since Mope.io was first released on October 7, 2016.

The Volcano is a sub-biome within Land, that was added on April 9, 2017. On the minimap, it appears as a large red circle, and is right in the center of the Land biome.. It contains dark brownish land, with big lava puddles surrounding the center of the Volcano. Hills and trees also modestly populate this area. Currently, the Phoenix, Land Monster and Black Dragon belong, and will spawn in this biome.

TimberLand, formerly referred to as the Amazon Rainforest, is the second sub-biome within Land, and was added on March 3, 2020. It is distinctively portrayed as a darker shade of green in comparison to the rest of the Land biome. Unlike the Volcano, it has no given location, but will most likely be found on one of the four corners of Land (this differs depending on your server). For the most part, it is identical to the rest of Land, however, it has a great deal more trees in comparison, all of which typically are right next to each other to allow animals to walk from tree to tree in real time. As of now, the only animals that will specifically spawn in this sole area every time are the Kakapo, Raven, and BigFoot. However, there may be more in future, according to the developers.

The background of Land. 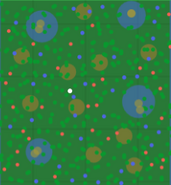 Initial design of the biome, from October 2016.

A Mouse and Falcon.

Pig in the mud. 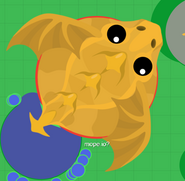 Giant Spiders and a Giant Scorpion at the poison lake. 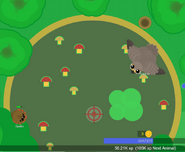 A Falcon in the Rainforest, flying over a poison lake that has no hills due to its placement in the rainforest.
Add a photo to this gallery

Retrieved from "https://mopeio.fandom.com/wiki/Land?oldid=82108"
Community content is available under CC-BY-SA unless otherwise noted.