UPGRADED to King Dragon!
You got firestreams that burns your victim alive! Watch your tail and slap them hard!

Not to be confused with the Black Dragon, the previous variant of the King Dragon that comes before it.

The King Dragon has quite a resemblance to Black Dragon, except its wings are wider and flap slightly, a darker shade, the eyes and noses are red, and the body is rimmed with many spikes, and the tail has a bone on it. It pretty much a glorified black dragon with many extra details that make it distinct. It is also bigger than a Black Dragon even if they have the same amount of XP. As it loses Lava, the King Dragon will turn darker shades of black, and will be completely black when at almost no lava (the color change is different, depending on which skin you're using).

The only two methods to get King Dragon are to level up from Black Dragon by killing all apexes, monsters, another Black Dragon, or to get lucky with a 1/1000 chance of getting a King Dragon since you will automatically 1v1 any other King Dragons in the server. From there it is a battle of skill. Another strategy (based on luck) is to team with another BD until they have nearly all apexes, then kill them. There are three main strategies to get all your apexes (you can use a combination):
Teaming

If you get a King Dragon, congratulations! It is the highest level/maximum achievement in Mope.io. There's nothing really you need to do to progress, except be careful around animals that could potentially kill you in large numbers (e.g. T-Rexes, Dino Monsters or Ice Monsters). King Dragons now take damage if they have no lava; be cautious of this. Another thing to be extremely careful of is downgrading. Unlike the Black Dragon, if a King Dragon is downgraded and has less than 10M XP, it will be downgraded to the Mouse rather than whatever monster is equivalent to the biome it's in. Additionally, when you die, you respawn at Mouse tier. So make sure you try to bypass the 10M XP mark or so, by killing lots of animals. Other than that, have fun trying to dominate the whole server!

If someone tries to tailbite you, don't bother. Just react quickly. Quickly press S and tail-slap them away. They'll be dead in an instant and you'll be plentiful in XP. But if there are monsters (especially Ice Monster and Dino Monsters), You should be careful, as they have more health than apexes.

Against a King Dragon

This animal is the hardest one to kill in Mope.io. It can one-shot kill nearly all animals with the powerful tail-slap, and extremely weaken animals with its fire-stream. When going against one, use at least an apex tier or an OP rare if you really want a tailbite, otherwise, it’s best to run. Your only equal chance against a King Dragon is in the 1v1 arena but even here, the KD will likely be good at 1v1, if you can get them to accept, which is unlikely.

Since the #GoldenAge update of December 2019, King Dragons can die of lava loss. If you can manage to lure one far out into the Ocean, Arctic or Desert, lead them as far away from Healing Stones as you can. King Dragons do exceptionally well in the Desert biome, so the best way of escaping them is to flee to the Arctic. As this is the one biome KD's take freezing damage from (and due to quicker lava loss), it may be reluctant to stray too far in.

If you manage to get together a team of T-REXes, Dino Monsters or Bigfoots (even a combination of each aforementioned animal), or team of toucans theoretically you would have a chance of killing a King Dragon. When attempting to kill one with sheer force, be passive-aggressive. Stay a safe distance away, otherwise the King Dragon will easily annihilate any animal. Appropriately, Dino Monsters should try tossing King Dragons far away from the lava; T-Rexes should drag them around whilst they are distracted, and Bigfoots should do the same.

King Dragons will probably try to trick you into being killed by them, so be aware of that. They may say: "Kill me" or "Bite my tail." Then, if you try to bite their tail, they will slap you hard and severely damage you, instantly killing you if you're Apex tier or below. Because of this, be wary of being near the radius of a King Dragon's tail unless they are distracted. 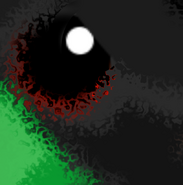 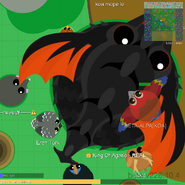 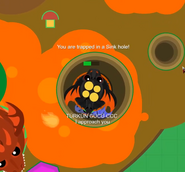 A King Dragon Without an animal image.

The fire-stream of a King Dragon.

Glitching a King Dragon to use firestream ability inside arena (no damage), by Dreamer 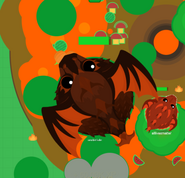 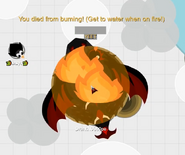 King Shah killing itself with the arctic volcano passive damage

Spectating a King Dragon near lake with low lava and dark wings. 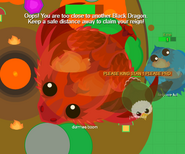 A woolly rhino next to a king Stan, saying "me take screenie"

A King Shah that is killing Dragon!

Queen Scarlet on NH event. Screen by ForeverAloneYet
Add a photo to this gallery

Retrieved from "https://mopeio.fandom.com/wiki/King_Dragon?oldid=84716"
Community content is available under CC-BY-SA unless otherwise noted.