UPGRADED to Killer Whale!
Whales blow out water when diving! (And sometimes other loot!)

The Killer Whale, informally known as the Orca, is the thirteenth Ocean animal in Mope.io. It's the equivalent of the Hippo, Ostrich, Boa Constrictor, Komodo Dragon and Sabertooth Tiger.

The Killer Whale starts at about the same size as the Shark does, but will grow up very quickly to about two times its original size. They are colored black and have a long mouth. They have four white marks: two long ones at the left/right sides of their back, and two shorter ones around their eyes. They have a fin on each side and two caudal fins. Its tail is in the shape of a wide 'V'.

The Albino Orca looks just the same, except it is white. The Golden Orca also is the same, except its whole body, other than its eyes, are gold. Their blowholes are more defined as they are easier to contrast from the body patterns. When "No animal images" is on, Orcas are just black balls with eyes and a short tail.

As a Killer Whale

Killer Whales, if following a set path, can travel to opposite oceans through land use. Just stay near water spots, and make sure to swim by lakes to get a water boost. However, you can stay by a lake (any lake if you can fine an abundance of water spots to make it) and hunt the slower land animals. However, it is much easier to use the River because you won't have to go on land. The Killer Whale's ability to generate a wave can be used to knock creatures off rocks and hills.

A prime strategy for eating prey is to camp under an island near the shoreline and wait for prey to pass by. When the timing is right, emerge and use the wave, effectively beaching your prey and most likely guaranteeing the kill. This strategy may not be as effective on land-tolerant animals such as the Pelican. You can also use it to knock animals into rocks, and if timed right, you will be able to corner and eat them.

When dealing with predators, use your wave on them. This will delay the chase and give you a lot more distance. If you are sucked into The Kraken's whirlpool, be sure to face them, and then once your ability is usable, use it to wash away the Kraken. This is a very reliable method; but always play it safe around Krakens. Your waves must be used responsibly, be careful when using them near an island for no specific reason. This is because if a Kraken happens to pop out from the island and whirlpool you, there is no way to defend yourself due to your ability in the process of cooldown which means it was a waste to use it.

A risky but fun troll is to team up with two or more Killer whales. Try washing a Kraken or Blue Whale onto the shore. Work together by using the waves of other Killerwhales, to ultimately end their survival. Be aware this strategy requires at least two Killerwhales.

As a Killer Whale, you can also use your wave ability to knock animals out of the water if they are close enough, and wait till they get on low health. If they are prey, eat them or eat the meat they drop. If they are a predator, try to get a tailbite to potentially kill it! Or if you can't, just eat the meat.

Real-life orca strategies can be used in Mope.io too. Use your wave to wash a Shark ashore and kill it(beware if you are smaller than the shark) or wash food off islands and into the water.

Against a Killer Whale

Killerwhales have a advantage in the ocean due to there waves, If you're a Kraken, try to dodge its waves as it can wash you onto land. It can also escape your Whirlpool when it uses its wave ability. If you're a King Crab, Try to dodge all of the orca's waves then use your own waves with your arm smash. You can also get a better advantage of killing an Orca if you hide under a Hill then use your ability. However after their stun ends, they can use their own waves, so be careful when doing this. If you are a Blue Whale, Hide under a rock or a hill, then when a Orca comes near, use your tail slap, when it uses its ability, dive again. Particularly aim to slap it onto the shore, as this will practically guarantee a kill.

Lately, the Killer Whale's wave has been nerfed so it's less forceful. Because of this, you don't need to worry as much about being beached. Regardless, still don't linger at the shore, whether you are predator or prey to it.

A Killer Whale looking for its prey.

A Golden Orca that is diving.

The Wave caused by the Killer Whale. 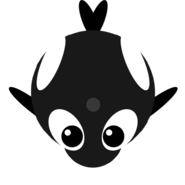 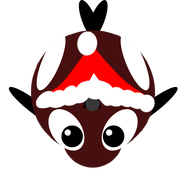 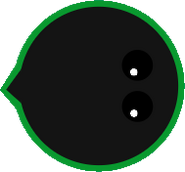 A Killer Whale next to a transparent Plankton bush.

A Killer Whale with a Hill next to a Hippo.

A baby Orca with a Shark.

Two Killer Whales in the ocean.

The wave of a Killer Whale.

Heaps of Orcas in the ocean.

A Killer Whale with a Pumpkin near 2 beehives and a conch.

A Rhino and a Killer Whale with pumpkins.

Retrieved from "https://mopeio.fandom.com/wiki/Killer_Whale?oldid=84754"
Community content is available under CC-BY-SA unless otherwise noted.