UPGRADED to Kakapo!
Hold W to hop around.
(Hint: Use ability on prey to stun them!)

The Kakapo is the fourth TimberLand animal in Mope.io, and it is equivalent to Pig, Woodpecker, Armadillo, Sea-horse and Seal.

The Kakapo is dark green feathered bird with two wings also colored dark green, with a pale cream color around his eyes and with a white-purple beak. They can grow to be very large for a tier 4 animal; around the size of a Berry Bush.

The Kakapo may not seem much since its only ability as of now (confirmed that the "bite" of the hop will be added)[1] is hopping. Hopping makes you go faster than your original. Most people dont realize that tail biting is quite easy with some luck. Try activating the ability near a predator behind them and tail bite them.

To play it safe, farm mushrooms and berries by pressing S into a mushroom to make it explode into multiple smaller mushrooms and berries. Avoid mud as Kakapos are slow in there, and could succumb to predators that can move around easily in mud such as Donkeys. Another option is to go to a lake to eat eggs and ducklings. Use your ability to chase after Ducklings if they attempt to escape. 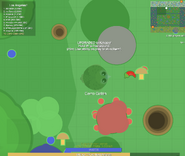 A kakapo underneath a TimberLand tree. 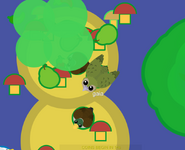 The 'Hop' ability of the Kakapo.

A Kakapo on a hill. 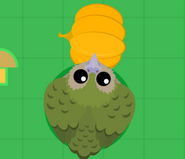 A Kakapo with a rare Golden Pumpkin.
Add a photo to this gallery

Retrieved from "https://mopeio.fandom.com/wiki/Kakapo?oldid=80296"
Community content is available under CC-BY-SA unless otherwise noted.