Honeycomb is a feature that was added into Mope.io, along with Honey Bees and Beehives.

It takes the appearance of honey combs in cartoon, a group of 5 yellow hexagons filled with orange-yellow honey. 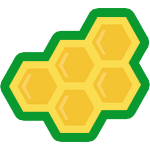 The new appearance of Honeycomb. 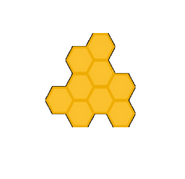 The old appearance of Honeycomb.

Honeycomb near a beehive, Ostrich and Ostrich babies.

A Lion near honeycomb and a Beehive.
Add a photo to this gallery

Retrieved from "https://mopeio.fandom.com/wiki/Honeycomb?oldid=79149"
Community content is available under CC-BY-SA unless otherwise noted.