Not to be confused with Whirlpools, a somewhat similarly-looking feature with an identical purpose, that only spawns in the Ocean biome.

Hiding Holes are features that allow all animals in Mope.io to be hidden from all entities and their effects.

Hiding Holes are brown circles (gray in the Arctic), with dark brown in the middle as the cave. They have lighter circles at the edges. The size of them can vary - smaller hiding holes will have less circles. The field of view of the outside world is edged with darkness while animals are inside, and the trait of being able to see animals that were inside the holes was shared by every animal, rather than just the Fennec Fox. After being in a hole for about 15 seconds, a notification pops up saying "You're now invisible to other animals in the hiding hole."

Small Hiding Holes are features that allow a more select group of animals in Mope.io to be hidden from all entities and their effects. Unlike Large Hiding Holes, they are typically only usable by animals within tier 1 to 6.

Hiding Holes are brown circles, with dark brown in the middle as the cave. They have lighter circles at the edges. The size of them can vary - smaller hiding holes will have less circles.

Not to be confused with Igloos, another large hiding hole-like terrain that is exclusive to the Arctic biome.

The Cave is an extremely large variety of hiding holes. It is currently released.[1]

As a predator, steer your prey away from areas with hiding holes at all costs. Since animals cannot damage other animals for three seconds after leaving a hiding hole, stay outside if you're camping another animal. Physically obstruct water sources so that the prey cannot get to one without having to go through you, and also so that you can resume the chase without delay.

Be aware that as a Black Dragon or King Dragon, you can't use hiding holes. The best way for you to hide is in the Volcano (only if its not erupting) when chased by Land animals. Use Healing Stones to heal yourself. However, when chasing prey you can hover over hiding holes, and thereby deny access to any animals. Also, if the trapped animal accidentally leaves the hiding hole, they won't be able to re-enter as long as you're standing above it.

In beta, don't worry about not damaging animals for three seconds after you exit, as this effect has been removed. Therefore, staying in hiding holes and quickly emerging to damage animals with little health is an effective strategy once more.

If you are a stinky pig, your ability can affect animals in holes, when a animal is low on health go in the hole and use you ability, effectively killing them.

An Arctic Fox pulling a predator out of a hole from using its ability.

The new appearance of the hiding hole in beta mope.io. 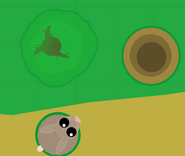 A Rabbit near a hiding hole.

A freshly upgraded Stinky Pig near a Hiding Hole.
Add a photo to this gallery

Retrieved from "https://mopeio.fandom.com/wiki/Hiding_Hole?oldid=84490"
Community content is available under CC-BY-SA unless otherwise noted.