UPGRADED to Giraffe!
Giraffes have long legs that can stomp anyone comes in their way!

The Giraffe is a tier 8 Land animal in Mope.io. It is the equivalent of the Cobra, Stingray, Walrus, Snowy Owl and Camel.

The Giraffe is an yellow animal with many detailed brown spots all over it. It has furry ears with a furrier mane going down the middle of its head. It also has a long extending snout/nose, and a tail with fur on the end. The Gold Trimmed Giraffe simply turns the spots golden, giving a lighter appearance.

Use the Giraffe's ability to farm food is the best way to level up. Using it on Bees and Ducks will lead to an instant upgrade. However, be cautious in lakes as Giraffes are fairly slow in water, and are easy targets to predators such as Crocodiles. Furthermore, consuming multiple red mushrooms and watermelon slices is also a valid choice (create watermelon slices by pressing S 6 times into a whole watermelon, causing it to explode).

Hunting and killing other non-AI animals for XP-gain is a lot more time-consuming and can be harder, as the Giraffe's ability can be lacking in range. Moreover, the Donkey and Zebra, the main ideal targets as they are right below Giraffes on the food chain and plentiful in XP, are very hard to catch due to their defensive abilities which can easily stun a Giraffe to make a quick getaway.

Many people hated the Giraffe once because of the fact that their ability does such high damage, that they easily picked off high tier animals that are even at half HP. It was also used for teaming frequently, which made Black Dragons vulnerable to teaming Giraffes, which was quite disruptive to the game's balance.

In a following update, KOA implemented extreme nerfs, making it only do two stomps and not damaging high tier predators at all, and reducing its stun time. Because of this, the Giraffe now is considered to be useless/unplayable by the community. Although it does 5 stomps.

The Momaffie is nearly identical to the Male White Giraffe, but her ears are slightly more drooped and the skin is more of a lighter shade.

The Girabie is just like its mother, except its ears are smaller and tufty. The hair is also less ruffled and paler.

The White Giraffe Family (2 other giraffes) is a male white giraffe with a Momaffie and a Girabie. If the Momaffie or Girabie gets killed, the male's eyes change as it is angry.

As a Girabie, you have less health points and therefore you will die easily. Beware of predators, as they will hunt you for coins. The best strategy for Girabie is probably just eat and level up as the ability is too weak to do serious damage.

Momaffie has low health as well, but superior to the Girabie's. This animal can steal kills if find an animal on low health. Activate your ability when you are behind them, and the damage will be done and you will have a kill. However, still be cautious about your health points.

Use your ability to stun prey and hurt them, then bite them as much as you can to do as much damage as possible and hopefully get a good meal.

If you happen to encounter another White Giraffe, be extremely cautious, as it can kill you with its ability as well. The best thing to do is probably to run if you're on lower or equal health points. However, if you have more HP then the other White Giraffe does, take advantage of this and kill it with your ability. You'll receive its coins and an amount of its XP.

Take advantage of your six extra health points and provoke a Beehive, the Bees will come out to sting and/or tailbite you, but it's not a problem since you have a good amount of health: start eating as many Bees and Honey as you can.

If you like to take risks, you can try to get close to an apex animal, a monster or even a Black Dragon and use your ability repeatedly on them, with your increased damage and extra health you may have the chance to kill your target if you're lucky enough. However, be sure to watch your health as health regeneration for the White Giraffe is quite slow and can only be accelerated with a healing stone or aloe vera plants.

Don't go too far into mud, the Ocean or significantly large bodies of water, as you are very slow in those places and will become an easy target for any predator capable of walking fast over water and/or mud without difficulty.

Protect your Girabie, as your damage will not increase if it dies, but instead decrease. Many people will hunt you, and Girabie can still be eaten when diving. Avoid most animals. Level up by farming, then eat your Girabie when you level up for extra experience points and coins. This is kind of being a cannibal or being brutal, but it is an option for earning coins.

Congratulations, White Giraffe Family is the rarest but best of all White GIraffe Variants! If you like the prospect of having a family, make sure to protect them and keep in mind that they have less health then you do. If you want to get a kill, it's advised that you get your Momaffie and Girabie killed, as this will increase your damage by a lot! Go behind an animal to prevent them from stopping your ability by using theirs, and stomp! Usually White Giraffe should be used to kill predators as it would be kind of a waste of the power to use on prey. However, if you are looking for an easy way to level up, hunting and eating prey will give you experience points in no time. Beware of your health, it is hard for a White Giraffe to heal without a healing stone or aloe vera plant, as mentioned before.

Giraffe that's about to kill a T-Rex 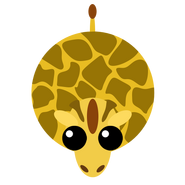 The old version of the giraffe. 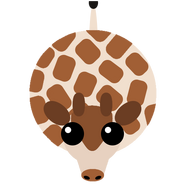 The scrapped version of The Giraffe. 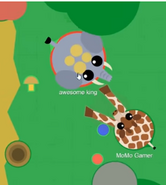 A Giraffe under a River 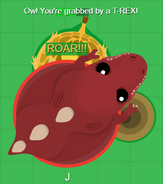 A T-Rex using its Special Ability on a Giraffe 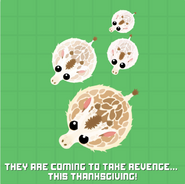 A family of white Giraffes.[1]

A freshly upgraded White Giraffe near a banana tree.

A male white giraffe beside a full giraffe family

A freshly upgraded Momaffie giraffe near a river

A Momaffie giraffe next to a bush that produces pears