UPGRADED to Giant Spider!
Place webs around the game to catch prey!

Not to be confused with Blackwidow Spider, another tier 14 spider that resides in the Desert.

The Giant Spider is the 14th Land animal in Mope.io, and equivalent to the Elephant, Cassowary, Blue Whale, Blackwidow Spider and Mammoth.

If being chased by a predator, try to go to a hill or a tree, if the predator can climb, try to go to the poison lake or a spider nest, as you'll probably be safe there unless you are chased by a Giant Scorpion or a blackwidow, but it would not be harmful.

An ideal strategy for Giant Spiders is to make an enormous buildup of webs. This is very time-consuming, but its efforts are well worth the time. It serves as a sufficient defence from almost all predators and prey all the way up from Fox Tier. You can make this more effective: try to find a water spot and start creating webs on top of it so that you can take over the puddle and drink peacefully. Eagles are your main helper, they will usually throw prey into webs if they detect them, take advantage of this and when they get trapped, start hurting them, keep in mind that when you hurt them the web will be released, try to push the prey into the maximum concentration of webs so that when it is released, it will be consecutively trapped and you can kill it. You can also resort to a mud spot near a water spot, at which point the prey will be even slower and when you create webs on top of the mud, the game will detect you as if you were on top of the web and the mud debuff will not affect you, but the trapped preys, a complete strategy.

In addition to all this, you can make alliance. Apart from the eagles that will bring you prey, try doing mutualism with a Blackwidow Spider, it can climb your webs, providing it safety, since it cannot make webs itself, only traps with them. In return, the Blackwidow, while protected in your webs, will start making a trap, will throw the trap away and when an animal is trapped, it will be attracted towards the Blackwidow Spider and with that, it will also attract it directly to the concentration of webs made by you. Combined with the already mentioned collaboration of eagles and some other Giant Spiders that multiply the production of webs, you will be guaranteed an evolution within the safety of your webs.

After the new update, your best option to level up is to go to Poison Lake. Since giant spiders are immune to poison and can climb hills, it's the perfect environment to thrive. Be sure to create plenty of webs in the area where there is an opening in the surrounding hills of the lake, so that at least non-climbing animals cannot escape, although you can also cover the surrounding hills with webs to catch climbing animals and double the effectiveness of the trap on non-climbing animals. Another alternative is to do the opposite, fill the entire interior of the lake with spider webs, covering only the openings of the lake and leaving a small (not very small) empty space in the middle so that you can drink (make sure you have a water source nearby for when the lake dries out) and catch falling animals (both climbers and non-climbers), giving them even less space to roam around the lake and dive for their lives while trying to remove the webs from the lake's boundaries to escape.

Many other Giant Spiders (even Blackwidows!) are likely to be in the lake, so there will be safety in numbers and the production of webs and nest size will increase even more and faster. Keep in mind that there will also be Giant Scorpions and Pterodactyls (both have immunity to poison) that will join the group besides the aforementioned Eagles (although Pterodactyls will generally throw larger prey). But don't get too confident, there are both Pterodactyls and Scorpions that will want to kill the residents of the lake. If this happens, it is best to make your nest elsewhere. Generally, Pterodactyls will be peaceful since Spiders create the structuring to trap prey, but make sure not to completely let your guard down.

Another alternative is to build your nest on top of the lava of the volcano, as in doing so, the game detects your character as if it were on top of the webs and you won't get burned by the lava or the occasional fireball thrown by the lava and you will be able to kill prey much faster and easier as well as being able to eat watermelons to regenerate your water. However, there are Phoenixes and Land Monsters that can spit fireballs that will reach you and hurt you, as well as push the webs you make. If this is not enough, the Black Dragon and King Dragon can fly over your webs and reach you directly, so don't do this unless the residents of the volcano don't attack you.

For trolling, one fun way is to find 2 apexes in a 1v1 arena, and get some other spiders to build webs around the arena. When the 1v1 is finished, the victorious apex animal will be stuck in the webs (unless it is a Pterodactyl). Soon, it will start running out of water and you'll be able to get delicious meat.

Although all these strategies make the Giant Spider appear to be overpowerd, the truth is that most strategies require a good synchronization and use of strategy (especially with other spiders), making it difficult to achieve, but effective if done well. Furthermore, there are animals with which you can evolve much faster like the Elephant. 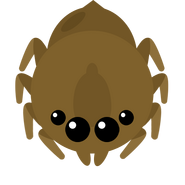 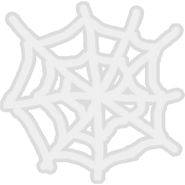 A colony of Giant Spiders at the poison lake, in their nest. 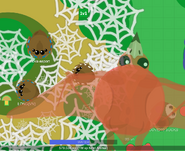 A Pterodactyl flying over a group of Giant Spiders in the poison lake.

The Giant Spider nest being taken over by a Giant Scorpion.

A Giant Spider underneath a rainstorm.
Add a photo to this gallery

Retrieved from "https://mopeio.fandom.com/wiki/Giant_Spider?oldid=78333"
Community content is available under CC-BY-SA unless otherwise noted.