UPGRADED to Giant Scorpion!
Sting and shiver your prey to death.
(Press W to Sting)

The Giant Scorpion is a tier 16 Desert animal in Mope.io, and is the equivalent of the Land Monster, Sea Monster, Ice Monster and Dino Monster.

The Giant Scorpion has a big black body, with three protruding legs on each side of its body. Its tail is black and curves up, with a dark red stinger on the end of the tail which looks like a drop of blood, the colour turns to orange, then dark red again periodically. The Giant Scorpion's eyes are frowning, and it has two large pincers in front of its face.

The Golden Scorpion has a slightly yellow colored stinger that gradients to a darker yellow on the end of it’s tail and its colored golden, hence the name. It also has different shaped pincers on its face, it's covered in golden spikes.

The Carnelian Scorpion is a light orange color with features similar to the Giant Scorpion. It has an additional lighter orange mark on its back and light red around its eyes. The stinger is pinkish and gradients to a darker red(although not as dark as the normal skin's). It has two small tufts at the start of each leg.

Use your ability as often as you can, as it does less damage than that of other monsters, but you have an advantage as your ability lasts longer, stops abilities and boosting, and also makes the animal move slowly and damages it. It also recharges very quickly. Abilities of other apexes can be harmful (e.g. Dragon's fire breath, Yeti's freezing snowball projectiles, etc.). If you are going to go after other apexes, first sting them, then chase them and bite them when they are shivering, because they are weak then and also can't use their ability to defend themselves. Just leave them when they have about 1/8 of their health left, because the will die 100%, even if inside a hiding hole. However, if you feel confident enough, try challenging an apex to a 1v1 battle. 1v1 is an effective way to level up, and will guarantee a kill if you know what you're doing. Refer to the main 1v1 article for extra tips.

It's a good idea to go after Pterodactyls, since they use up all their energy flying, they’ll be slow and will need to eat to regain energy to fly or boost away. Before that happens, sting them and keep tailing them no matter what they say. The pterodactyl will die after just 2 stings, and you will get free XP. Most apexes are safe to hunt, but the T-Rex is one that you should be cautious around. T-REX no longer suffer burn-damage in the desert, so there will be some T-Rexes in there. Their ability can damage you, especially if you get freeze damage from being in the ocean. If a T-Rex tries to attack you on low health, stay near hills and rocks, as they cannot climb them. If the T-Rex doesn't leave, use your ability on it to make it leave. Your ability has a larger range than theirs, especially at 8-9 m, so if it is pursuing you, pretend to be fleeing away and turn around to sting the T-Rex before they have time to react.

Also, there is another idea is to go outside of the desert, and to the Poison lake. There will most likely be a large number of Giant Spiders there. Since you can now walk on their webs, you can dominate the Poison lake. When Pterodactyls drop prey in the lake, you can take it all for yourself. You can even try eating one of the Giant Spiders or Pterodactyls too, but it would probably be easier to make an alliance with them, or at least be on peaceful terms as some Spiders/Pterodactyls since they can contribute to trapping a lot of your prey. If you do stay around the lake, beware of receiving damage from the water being cold. It may lead to you losing health and potentially being killed. Try to get water from a Healing Stone, or consume water droplets at the edge of water spots. You can also eat Blackwidow Spiders that may be at the poison lake, but their Spin Web ability will slow you down significantly, allowing the Blackwidow to get away. Eat Blackwidows that are low on water or stunned, as their decreased speed makes them much easier targets.

Avoid Black Dragons at all costs, as they will most likely try killing you if they ever set sights on you (since the Giant Scorpion is one of the apex kills needed for King Dragon) though this is unlikely, as their demand for Lava leaves them mostly bound to the Volcano they live in. If they ever do visit the desert, find the nearest hiding hole and wait until the Black Dragon leaves. Try not to sit at a hiding hole near a healing stone as they can camp you easily while thriving on the gem. If you're feeling risky you can sting them as the Giant Scorpion's ability does massive damage to them and they'll most likely leave you alone after just a couple of stings. Additionally, if you are at the Volcano, don't hide in one of the volcano's hiding holes. If you do, the Black Dragon can wait there forever, since it won't lose lava.

When wanting to gain XP from prey, wait in a hiding hole or pretend you have left the game, and as the prey comes closer, use your ability on them and kill them, since the ability is like sweating (disable running and ability) without the water draining part but with the vibration and health-drainage part. So it’ll be an easy kill. Just make sure there are no hiding holes around.

Also, if a Dino Monster is all set to kill you and is on low health, sting them, and if a hiding-hole is far away, you'll get a guaranteed kill. If you’re the one with low health, seek refuge in a hiding hole, or better still, lava if you can. Never try fleeing into the Ocean or Arctic, because you will freeze and be slower in the ocean. Eating Watermelons at the Volcano can sustain your water supply until you have the chance to run again. Your equivalents are mostly easy to kill except Dino Monster and Ice Monster. Be careful with them! Dino Monsters, however, do have their weaknesses. While they try to ram into you, make sure you are facing them. This strategy requires good timing. At the last second, use your ability before they can make contact with you. If possible, try to lure them to somewhere far from a hiding-hole.

A mini Giant Scorpion on a rock, using its sting prey ability. 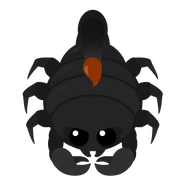 A Giant Scorpion near a Pakistani Vulture, Vulture and Fennec Fox.

A Giant Scorpion walking on the webs of a Giant Spider colony, at the Poison lake. 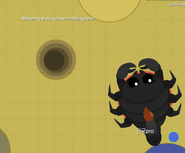 Giant Scorpion camping an animal in a hiding hole.

A Giant Scorpion eating some Aloevera.

Purrfect Speed holding a Soccer Pumpkin as a Carnelian Scorpion. 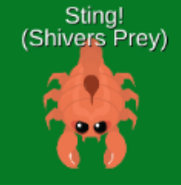 The "Sting Prey" ability for the Carnelian Scorpion. 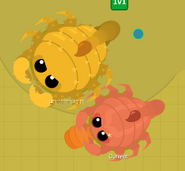 A Golden and Carnelian Scorpion walking. The Carnelian has a pumpkin.
Add a photo to this gallery

Retrieved from "https://mopeio.fandom.com/wiki/Giant_Scorpion?oldid=84799"
Community content is available under CC-BY-SA unless otherwise noted.