UPGRADED to FOX! ,
You can kick players out of hiding holes! (Press W when in one)!
+ Hide in red berry bushes!

Not to be confused with the Arctic Fox or Fennec Fox, the Arctic and Desert counterparts of the Fox, respectively.

The Fox is the sixth Land animal in Mope.io, and the equivalent of the Hedgehog, Peacock, Jellyfish, Arctic Fox and Fennec Fox.

The Fox has a more bushy tail and a head separated from the body, as well as a more robust head. It has dark orange body fur, and tufts of fur that stick out. Its appearance is much like that of its cousins, the Fennec Fox and Arctic Fox, aside from its fur color. The Gold Trimmed Fox has the appearance of thicker fur and bigger ears that point up. It has a gold tail as well as gold ear fur and a marking on its back, gold eyebrows and a gold underbelly.

The Fox's best ability is hiding in berry bushes. Use this ability to your advantage. You can hide and camp in a berry bush to wait for your prey, or you can simply chase after prey; since they cannot pass through berry bushes, you should have an easy time catching them. If they go into a hole you can use your ability to kick out your prey and then continue chasing them. If you are being chased by a predator, hide in the nearest hole. If the predator goes in, use your ability and run. You can also troll; go into a cave, wait for animals to come in, then bite their tail.

You can also go to a river to eat Red mushrooms, Pears and Starfish, or to the volcano, and you will find lots of watermelons. Spitting at them by pressing 'S' will produce slices. A couple of them will give enough XP to instantly level up. Kelp is another alternative to level up fast. However, it's a little more risky, as the Fox can't swim well. Avoid ocean predators such as the Turtle if you level up there.

You can use your ability to troll people as you can camp in a large hiding hole and kick other players out to their doom. It’s fun to see their reactions. Simply wait until an animal that can fit in your hiding hole is going in to hide from a predator. When they go in, kick them out. If the predator went in they will also be kicked out, and if they didn’t the prey will most likely barrel into them. Either way, the prey will be right back in danger of dying. 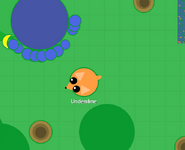 A Fox wandering around near a water spot and a hiding hole.

Fox with "no animal images" option on. 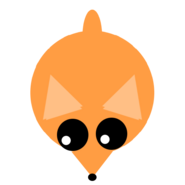 A Fox with a Deer in a lake. There is also a Rabbit nearby.

A team of 3 Foxes at the top of the map before the Arctic was added. 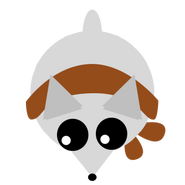 A thumbnail with multiple Foxes and two lions.

A Fox being carried away by an Eagle

The new high-definition skins leaked on YouTube.
Add a photo to this gallery

In the earlier days of the Fox's release, it was hated for being able to kick out any animal from hiding holes. This meant that when teaming with a high tier such as a Black Dragon, its prey wouldn't stand a chance of hiding from the Black Dragon. In later updates, its ability was limited to affecting only animals from Crocodile tier and below.

Retrieved from "https://mopeio.fandom.com/wiki/Fox?oldid=84534"
Community content is available under CC-BY-SA unless otherwise noted.