UPGRADED to Flamingo!
Hold W in water to search for food underwater.
(Tip: Any nearby underwater animals will get surfaced by the flamingo!)

The Flamingo is the fourth Ocean animal in Mope.io, and the equivalent of the Squid, Deer, Reindeer and Gazelle.

The Flamingo starts off with a light pink head and torso, with light pink tail-feathers as well. However, if you eat enough Shrimp and Plankton, you get more and more pink until you become completely pink.

Try to dig for food first. Digging in the ocean is the best because it gives you plenty of space away from other Flamingos that might try to rob you of your food. That will give you plenty of A.I. Shrimp, Trout, Crabs or Sea-horses to eat. Make sure to eat the bots quickly, as they will disappear after a certain time. You can also use a Healing Stone to level up effectively.

Another somewhat risky strategy is to trail near a shark , and scavenge off meat pieces that appear when it activates the Bite ability. You could even try to tail-bite them but be careful. The best way to bite a predator is, be flying above them, and quickly press W when directly above their tail. Since Flamingos can land instantly at will, without much warning, it's easier to make it look like you're not focused on the predator and unsuspectingly bite them.

If an ocean predator comes, go to the nearest hill and then fly away. For most predators, you can wait them out on a land-mass. However, for the Turtle and Pelican, they can still reach you on a hill, so you'll have to fly away from them. Hanging around King Crabs in this case can be beneficial for your protection on both land and sea. Be aware that the Flamingo cannot dive, so the flying part of your ability is the only means of escape.

Another option is to exit the Ocean, and go to a Lake in the Land biome. There, you can eat Lilypads and Ducklings. You can also have a grand feast on the ducks's eggs . However, avoid predators if you do go there as there will be some; fly away on a hill if a predator tries to chase you.

The Flamingo digging for food, producing some Plankton and an A.I. Crab. 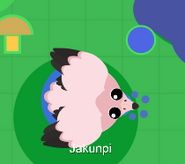 A glitched Flamingo, seeming to be digging for food on land.

A flamingo near a Pufferfish.

A maximum pinkness flamingo on a hill.
Add a photo to this gallery

Retrieved from "https://mopeio.fandom.com/wiki/Flamingo?oldid=73369"
Community content is available under CC-BY-SA unless otherwise noted.