UPGRADED to Elephant!
(Use your long trunk to attack and eat food!)

The Elephant is the 14th Land animal in Mope.io, and the equivalent of the Cassowary, Blue Whale, Mammoth, Blackwidow Spider and Giant Spider.

The Elephant has quite a similar shape to Mammoth, but it is gray. It has oval shaped ears that are larger than the Mammoth's in a darker shade of gray, a small trunk that points outward, a pair of cream-colored tusks that are relatively shorter than that of a Mammoth's, and a small tail sticking out the back. Its black eyes are rounded with prominent highlights.

The Golden Elephant is just like the normal elephant but all parts of it are Golden and it’s right tusk is broken.

The white elephant is like the elephant but it’s all white except for the tip of the tail, which is black, like the normal elephant. It also has angry eyes, unlike the other skins.

Wait in a hiding hole and wait for prey to come to you, then swipe with your trunk. Eat your prey quickly before they revive. If you're willing to take risks, try waiting in a hiding hole for a Dragon or a Black Dragon. Tail-bite it, then swipe with your trunk. Get back into the hiding hole before they revive. If you're not willing to take risks, don't do it. Instead, if you simply want to get to Dragon, hunt Rhinos, Crocodiles, Boa Constrictors, Ostriches, or Eagles, all easy targets for elephant. Hippos are good but are very hard to kill because of their ability, so try Boa Constrictors or Ostriches. If you see a Golden Eagle, SCRAM! If it tries to pick you up, hit it with your trunk. But, if your ability is in cool-down, try to run/hide before it can pick you up.

You can also try diving under a rock/hill in a crowded area in the ocean and wait for prey to come. If it is quite injured, or if it is near the shoreline, quickly emerge and swipe it; either push the sea-animal onto the shore, or kill instantly if possible.

Since the BigFoot update, Elephants, like the Blue Whale, can kill bees in one shot. Use this to your advantage, and farm bees until Dragon tier. Additionally, the ability can one-shot Frogs and Ostrich babies. Ostrich babies will provide heaps of XP, and aren't as fast as the mother Ostrich, therefore being easier to chase. Another thing to take note of is, your ability can still damage cactus. Most animals are not able to do this, so a risky alternative is to farm cactus in the desert. Be aware water-loss and predators, as this can prove to be fatal, if the area is crowded with cacti and the predator comes and corners you in between rocks or hills.

You should also watch out in lakes, because sneaky Krakens can dive under a bush or island and wait for you till your close by, then use their ability to try to kill you. If you give a good look at the bushes, then you might see them. However, when you are not aware of this and the Kraken gets you, quickly use your ability against it so you can try to escape. But it won't always help, since the ability doesn't have as much force as the Blue Whale's does. Generally try to stay out of the ocean, as you are slower there, and there are easier pickings on land.

You can also go to the desert and farm melons. Whack any unwanted prey/predators away, and you can use your trunk to eat multiple melons at a time. Melons are safer than cacti and have a lower risk of death. You dont burn in the desert but lose water a lot faster. 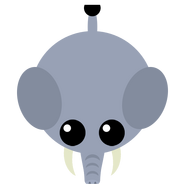 An Elephant next to a Rabbit, a Dragon, a diving animal, and a Shark.

A burning elephant going into a hiding hole. 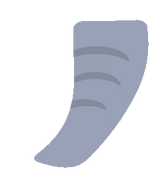 Cheetah Mole and A Burning Elephant.
Add a photo to this gallery

Retrieved from "https://mopeio.fandom.com/wiki/Elephant?oldid=78363"
Community content is available under CC-BY-SA unless otherwise noted.