UPGRADED to Dragon!
(Wow, You're amazing!)
Fly over everything, Hold W to shoot fire!

The Dragon is the fifteenth Land animal in Mope.io. It is the equivalent of The Kraken, Yeti, The Snowman, Pterodactyl, King Crab, Phoenix, T-Rex and The BigFoot.

The Dragon has a pale turquoise body and two batlike wings that are a slighter darker shade of turquoise. It has three spikes down its back, and one on its tail. It has a darker underbelly, and it has a short snout with prominent nostrils.

The best way to level up with a Dragon is by 1v1. It is the most accustomed to fighting in the arena, as it has the most fluent movement in the arena, and is easy to work with. While it isn't essential, it is very effective, and while 1v1ing isn't the easiest concept to do, practice will pay off for good.

When hunting, use the dragon's fire breath carefully. It does a very little damage, and when used, it slows you down. Only use the fire when their target is in range. The fire can be useful because it can cancel your prey's Special ability and stop it from getting away. This applies for prolonged-use abilities, such as the Eagle and Rhino's The Dragon is one of the animals that are not sped up or slowed down anywhere, including in rivers, oceans, hills, mud, etc. This can be used to the player's advantage, chasing down prey who are slow in said places and burning them. However, the dragon is slower than most land animals on land, and most ocean animals in water. This is probably to balance out the dragon.

Avoid Black Dragons, especially if they have a teammate(s). They are extremely dangerous because they can camp the player in a cave if they want. Their fireballs can cover a long distance and does not slow them down when used, unlike the dragon. However, there are exceptions: the player should burn them when they are distracted by a lot of animals, or when they are low health, or in the Ocean/Arctic/Desert without any teammates. Still, even in those scenarios, the player should watch out as they will lose a lot of XP if they aren't careful enough. The same applies to animals in the Monster tier. They should be avoided, but each monster is weaker in one biome. Depending on whichever monster poses the largest threat, hang around in the biome that that monster doesn't do well in.

Chase down Elephants unless you have low health or the elephant has allies. Burn them to deal damage when close, and steer the Elephant completely away from water. Since Elephants are fairly large and cannot climb hills, it is easy to pursue them. If they go into a cave, go in after them as the elephant usually runs out of water faster than dragons. However, do not let them get to water, as they can dive for a long time and also have their water recharged. Also don't attack a team of Elephants, as their abilities combined can easily overcome a Dragon.

Giant Spiders are also an easy victim of Dragons. Try to chase them to a bad spot - preferrably in water, as they cannot make webs, cannot dive for long, and move extremely slowly, as well as annoying water animals distract them. However, on land, the spider can usually ward off dragons as they can go into small hiding holes and make webs - both not ideal for dragons.  You can try to hunt down Cassowaries; lead them to a water source, as cassowaries are the slowest animals in water. With that being said the cassowary can usually run away because they can stun the dragon with their ability, they can go in hiding holes and do have a long diving time. However, if you see one in the ocean, still block its path back to shore as you can easily trap if then.

Hunting sea creatures will not guarantee a high success rate, as they can dive and hence, easily escape. It would be recommended to go for a sea animal that is on low health. Battling Krakens is not a good idea, but you can try. As the dragon's ability's reload time has been increased, the kraken can easily dive underwater. Also, the Kraken can use their whirlpool against the dragon, which deals large damage. Unless the Kraken has extremely low health, the player should not try to hunt them down as a dragon. The same applies with the King Crab except it is even deadlier; with faster reload and force from the claw smash, you may succumb to one easily so avoid them when seen.

You can attempt to fight Yetis; the snowball does little to no damage to a Dragon, so you won't have to worry about that. Try to hold them in a place where it is difficult for them to run away, and spam your ability. That should kill them if they do not retreat. When fighting Phoenixes, you should try to lead it away from lava. There, they can easily be killed as they cannot recharge their lava unless at a stone. However, the player should still watch out for the fire tornadoes, as they can do a lot of damage to the dragon. Preferably, lead the Phoenix to a water-body or a hiding hole. Avoid T-Rexes at all cost. Their bite ability is very overpowered, and the Dragon's meager fire isn't an even match in comparison. If confronted by a T-Rex, try to stay on it's tail-behind it's jaws so it can't use it's ability on you and bite it. When on low health, flee to a ocean or lake.

With all that being said, if there is an opportune time to kill another apex animal (e.g. if it is on very low health), you should definitely try to kill it. The Dragon's fire has been buffed a little to do more damage to apex tiers, so definitely take any opportunity that arises.

Also, the desert is a good farming spot for eating cacti and burning Pterodactyls to their sad ends. However, you still burn there so be extra careful from dying. Giant Scorpions are extreme dangers, since their ability inflicts massive damage on you if left untreated. If one stings you, get into a Hiding Hole to receive less damage from the shivering. 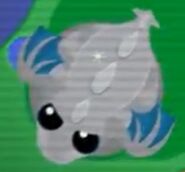 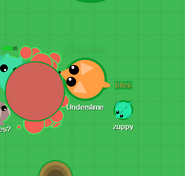 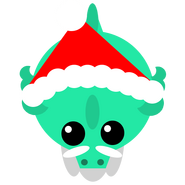 The Winter Skin of a Dragon 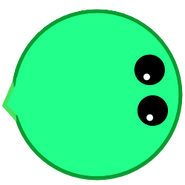 A Dragon with Old Skins activated. 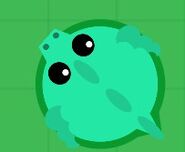 The Message that appears if you are killed by dragon fire.

A Winter Dragon flying over a Hill

Running from a Dragon

Two Dragons teaming a Rhino (me)

A Dragon and Hippo

A Dragon team of 3

A Dragon on a hill 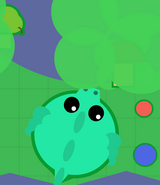 A Dragon eating a Mushroom Bush 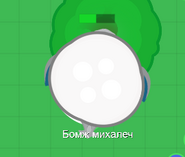 A Knight Dragon that's become an ice statue from an Aqua Yeti.

A Mouse chatting with a Golden Dragon. 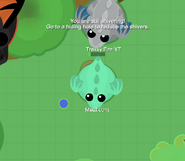 A shivering Dragon that's about to die.
Add a photo to this gallery

The Dragon is based on the Draco, aka Dragon. They are quite common in most mythology and fairy tales. Unlike in Mope.io, fantasy dragons are able to fly high, and can shoot large fire streams like the King Dragon.

Many people formerly hated the Dragon due to the fact it was mildly overpowered and frequently used for teaming. The developers have nerfed the Dragon a few times throughout Mope.io's existence and was majorly nerfed in the birds update, along with their fireball cooldown increasing from one second to three seconds.

This caused many people to label the T-REX as unplayable, since it was very poor against Dragon and was bad against most other apexes as well. The T-REX however was buffed in an update where it has a longer dive time than Dragons and can still use their ability/shake animals when on fire or even hurt/stunned by anything else.

Finally, when Battle Royale and Team Mode were released, the Dragon (and pretty much everything else that spawns fireballs) got a fireball delay. This feature means that they are unable to burn animals that were hurt 3 seconds ago. Although ground fires still burn, the nerf was quite successful since ground fires are not very common. This was all done to prevent Dragons from teaming with other animals or Dragons. Another nerf includes that people can't tail-bite animals that are lit on fire. MopeTubers made many criticisms to how unbalanced the Dragon was.[1][2]

After the #GoldenAge update on December 23, 2019, there was a pattern of complaints that the Dragon was now underpowered. All other tier 15 animals could easily kill a Dragon, even a whole team of them. Ironically, the T-Rex at this time was also harshly criticised for its extreme imbalance and being able to kill an apex with ease, especially the Dragon. The only area that the Dragon is slightly superior in is the 1v1 arena.

Retrieved from "https://mopeio.fandom.com/wiki/Dragon?oldid=80494"
Community content is available under CC-BY-SA unless otherwise noted.